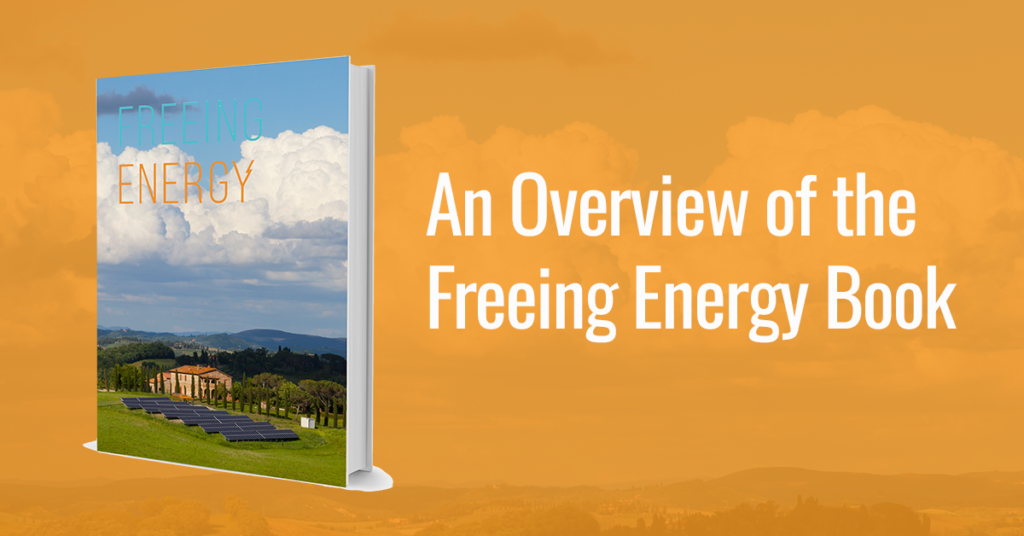 This is a revised overview of the Freeing Energy book, due out later this. I would really like feedback so please share your thoughts in the comments section or directly via email. Thank you!

The most sophisticated machine ever built

The electric grid has been called the greatest engineering achievement of the 20th century. At $2 trillion a year, electricity is also one of the largest industries on earth. Nearly every aspect of our modern society depends on electricity. Without it, aluminum and steel would be as rare as gold and there would be no smartphones, air conditioners, websites, elevators, subway trains, or X-ray machines. Despite its amazing success, the industry that sells electricity has struggled to innovate and is long overdue for an upgrade. The price of its core product, the kilowatt hour, has barely moved in 50 years. Outages are increasing in frequency and breadth. Most urgently, the power plants that feed the grid are among the largest sources of pollution and greenhouse gases in the world.

Solar is a start but it’s not enough

Solar power has the potential to fix all this but it is falling short. In recent years, solar has become cheaper than coal, nuclear, and in many cases, even natural gas power plants. Yet solar remains far less than 5% of the grid. What is going on? The problem is what the industry calls “intermittency” – solar only works when the sun shines. As clouds roll over or the sun sets, we have no choice but to fall back to coal, nuclear and natural gas plants to keep our lights on. As Michael Liebreich, the founder of Bloomberg New Energy Finance, says, “even 3 cents per kilowatt-hour isn’t enough to motivate the sun to come out at night.” This is the deep irony of solar power. Rather than freeing us from fossil fuels, intermittency actually makes solar power dependent upon them. Even more ironically, this awkward relationship tethers the pace of solar (and wind) adoption to the long business cycles and risk aversion of the fossil fuel plant owners — the electric monopolies.

But, changes are coming and they will happen faster than many people predict. They will be driven by a common technology that is finding a huge new role – the humble battery. It may sound far fetched but the same technology that powers our smartphones and starts our cars will soon level the global playing field for solar, unlock the electric monopolies, and unleash a clean energy renaissance.  And it’s not just the power industry. Batteries are also revolutionizing transportation with more the 4 million electric cars already on the world’s roads. Despite skepticism that batteries are currently too expensive, Freeing Energy will make the case that battery costs will drop faster than expected. But even dramatic cost reductions are not enough to compensate for a stretch of days of rainy weather or the reduced sunlight during shorter winter days. Freeing Energy will present new technologies and business models that can address the big challenges of long duration intermittency.  Lastly, while batteries will also be embraced by the grid and ultimately lower its costs, it’s unlikely those savings will make their way to end customers. Alternatively, Freeing Energy will explain how communities, businesses, and homeowners can realize the economic benefit of batteries directly and much sooner than the electric monopolies by building their own “local energy” systems. Together, all these trends will democratize the energy industry and unleash a tsunami of innovation.

The late Jim Rogers, the one-time CEO of utility giant Duke Energy, said it best, “it’s time for the power industry to become a technology business again.” Like the days of Thomas Edison and Nikola Tesla, electricity is poised to once again become a dynamic, technologically-innovative industry. History teaches us that the transition from fossil fuels to clean energy is just the most recent in a series of major energy transitions. The name of John D. Rockefeller lives on for his role in transitioning lighting oil to kerosene. The name George Westinghouse is etched into history for his role in replacing kerosene lighting with the electric grid. Each of these historical transitions upended the status quo, reshaped society, and shifted huge fortunes from incumbents to innovators.

Most experts agree that a transition to clean energy is inevitable – the main debate is how quickly it will happen. Energy historians point out that previous transitions each took 50 years or longer. They say, no matter how urgent, clean energy will take just as long. But Freeing Energy will make the case that this transition is unlike the others and has the potential to proceed far faster. Previous energy systems were built on massive economies of scale – building larger and larger infrastructure to drive down costs. This strategy concentrated huge amounts of capital, and required the involvement of governments and multi-national mega-corporations. Unsurprisingly, previous transitions moved slowly. In contrast, the clean energy transition also benefits from economies of volume. Rather than relying exclusively on enormous, centralized power plants, the generation of electricity now includes millions of smaller, independently-owned power plants, like rooftop solar, community solar, and microgrids. Just like the computer industry, mainframes faded away when computing became cheaper and more flexible by aggregating a large number of smaller personal computers.

Accelerating the pace of change

For the first time in modern history, energy will no longer be controlled solely by governments and giant corporations. For the first time, customers have a choice – they can now generate nearly all their own electricity – it is cleaner and will soon be cheaper than the grid. Because batteries allow customers to use every bit of solar power they generate, they are far less dependent on the grid. This, in turn, untethers customers from the long and highly-regulated business cycles of the electric monopolies. The consumerization of electricity will begin. Homeowners and businesses will soon make electricity decisions just like they decide on air conditioners and water heaters. It has even been suggested that the biggest threat to the electric monopolies may turn out to be Home Depot and Lowes.

The effects of consumer-generated electricity will reverberate across the broader industry. As electricity systems get smaller so will the capital required. The risks of failure will be isolated. The pace of the clean energy transition will shift gears from the 20-year planning cycles of the electric monopolies to the sub-year decisions typical of home renovations and building upgrades. Like the transition from mainframes to laptops, and landline telephony to mobile phones, the original, exclusively-centralized model will be disrupted by countless smaller, cheaper, easier solutions.

Electric monopolies vs the consumerization of electricity

The shift to distributed, fuel-free electricity will force substantial changes on the century-old electric monopoly business model. These incumbents have an even more crucial role to play in the future but it will be very different than today. The transition will be neither easy nor welcome. Some will embrace it and help shape the industry’s future. But most will fight it. They will argue that “grid defection” will lead a “death spiral” leaving their poorest customers paying for the entire grid. Most will use their massive lobbying budgets and political influence to protect their status quo. These incumbents risk irrelevance and having their assets taken over by their more visionary brethren. Freeing Energy will explore the coming battles between the electric monopolies and cost competitive local energy. It will chronicle the emerging battlefronts. It will explain the new Utility 2.0 business models and how incumbents can sidestep the existential risks of grid defection.

Opportunities for investors and entrepreneurs

If you’re skeptical outsiders can play a role in such a large and entrenched industry, just consider Tesla Motors. Experts predicted it would be decades before electric vehicles were widely adopted. Yet, within a few short years, Tesla has reshaped the auto industry. They used mostly off-the-shelf parts and materials, the same things available to Ford, BMW, GM, and every other car company. They had few industry insiders on their team. Nonetheless, with huge doses of bravado and even more innovation, Tesla built the safest and highest rated car in history, electric or otherwise. In 2018, Tesla outsold Mercedes, BMW, Lexus, and every other luxury car manufacturer. Now nearly every car company is rushing toward electric vehicles as quickly as possible. Freeing Energy will explore opportunities and risks for clean energy investors and entrepreneurs. It will analyze the cleantech crash of 2011 and explain how circumstances have changed. It will present five categories of investments and nine foundational business models that will play essential roles along the path to clean energy and the consumerization of electricity. (Notably, the electrification of transportation will play a central role in unlocking the electric monopolies.)

The shift from fossil fuels to clean energy may prove to be the largest and most disruptive energy transition in history. The electric monopolies will be reinvented, unleashing a new era of innovation, entrepreneurship and customer choice. Freeing Energy will explore the most important questions of our clean energy future. How long can solar and battery continue their stunning price declines and how low can they go? What is the future role for coal, natural gas, and nuclear, as well as fuel-free alternatives like wind and geothermal? Who are the pioneering policymakers, innovators, and business people leading this transformation and what are they telling us about the path ahead?

With over 200 interviews, covering Africa, Asia, Europe, and North America, Freeing Energy is written for people who want to understand the clean energy movement and are interested in how they can play a part. It will lay out a path that goes through garages of entrepreneurs, through rural villages of Africa, and through the boardrooms of giant utilities to deliver the cleaner, cheaper power of tomorrow. With interviews of people like Jigar Shah, the late Jim Rogers, Amory Lovins, and many others, it will chronicle the visionaries and leaders who are creating our clean energy future.