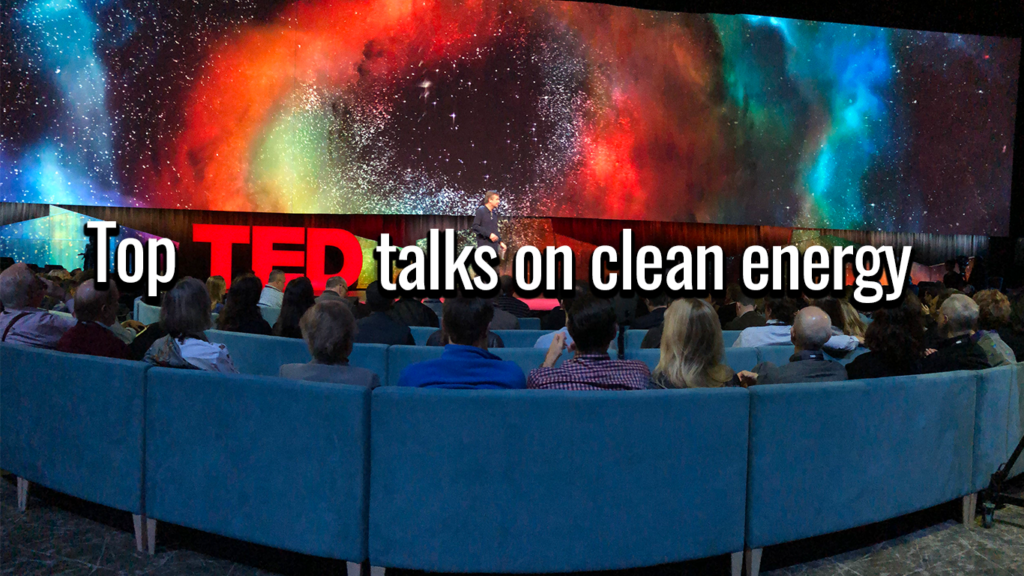 I’m here in Vancouver for the annual TED conference (Technology Entertainment and Design). TED started in 1984 as an eclectic group of cross-discipline, big thinkers. I started attending in 2000, making this my 20th year. Over the decades TED has evolved into a movement of sorts, built on an amazing array of “Ideas Worth Spreading.” What started with a few hundred people meeting in Monterey, California, has become a global phenomenon touching every corner of the earth and hundreds of millions of people. It now includes a video library of tens of thousands of recorded talks available for free to everyone on the globe. The conference and its unique format have spawned thousands of smaller, regional, TED-like conferences called TEDx’s.

Energy has been a recurring theme across the years of TED. In fact, it was some early TED talks that first opened my eyes to the magnitude of the coming clean energy transition. In some important ways, TED has been a catalyst in my shift from the tech exec to clean energy entrepreneur (and writer). I have even done my own TED talk, “Accelerating the shift to clean energy.”

I have watched hundreds of TED talks over the years. So, after some curation, here are the best TED Talks I can find on the clean energy transition. We may not agree with every idea from these speakers, but their bold visions are driving critical conversations that will help create a future of cheaper, cleaner, and more reliable energy. 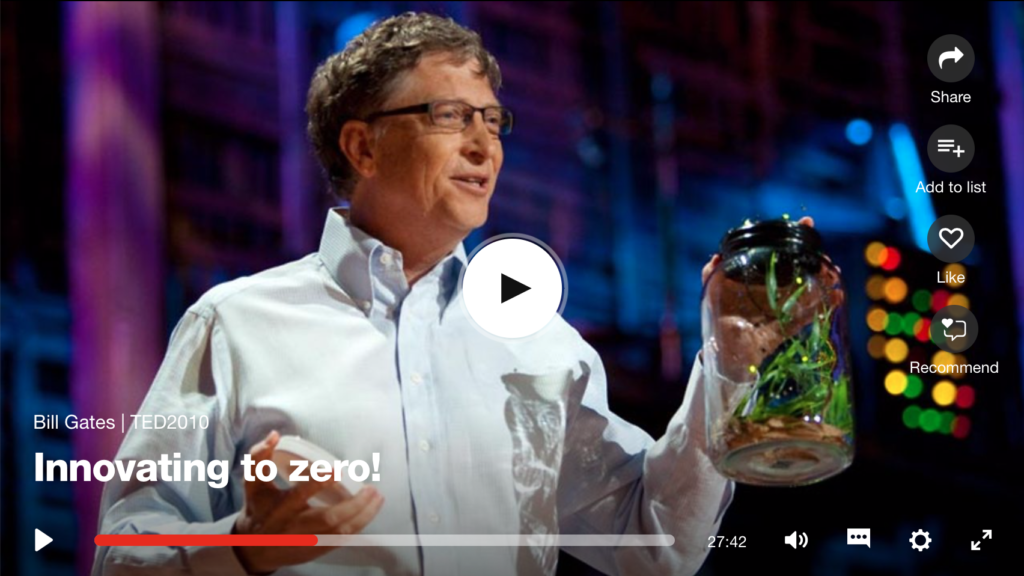 Bill Gates holds a healthy skepticism that solar, wind, and batteries can singlehandedly power our future. Instead, he is a staunch advocate that we also need innovative new types of nuclear power. He explains the logic behind his assessments and shares some background on a new kind of reactor his company, TerraPower, is pioneering.

6. Does the world need nuclear energy 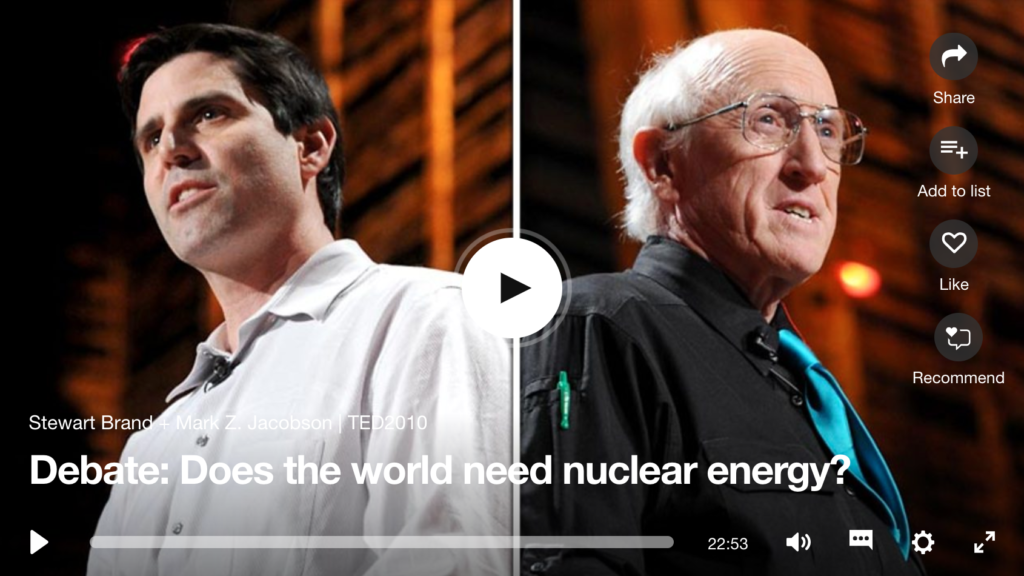 In a break from TED’s usual single-speaker format, TED curator Chris Anderson brings up two speakers to debate one of the most divisive topics in the clean energy world – nuclear power. On the side of nuclear is, somewhat notably, Steward Brand, one of the founders of the environmental movement.  On the other side is famed Stanford grid expert, Mark Jacobson. Does the world need nuclear power? You decide. 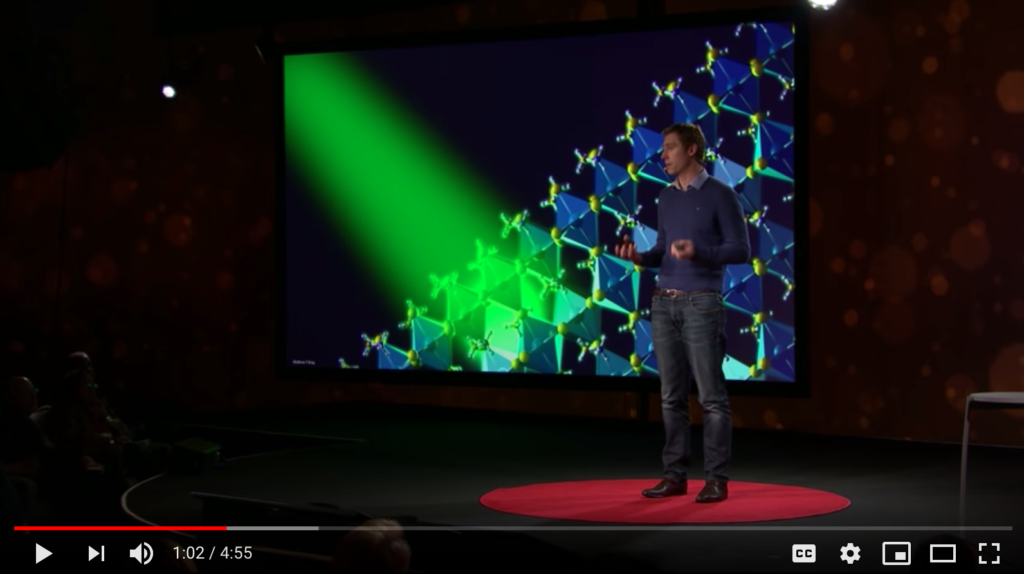 Sam Stranks, Royal Society University Research Fellow, TED Fellow, and Group Leader at the University of Cambridge, took the TED stage in 2016 to explain a radical new idea in solar – perovskites. This common mineral is cheap and easy to manufacture into solar cells. No other solar technology has improved as quickly as perovskites. They have the potential to further accelerate the ever-decreasing costs of solar energy. 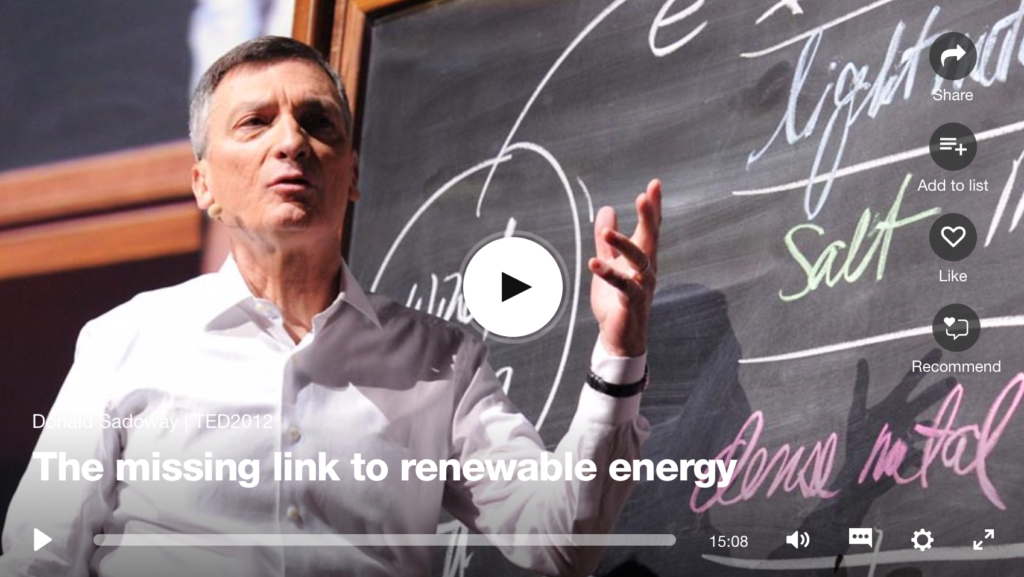 Daniel Sadoway is an MIT professor and the co-founder and Chief Scientific Advisor of battery company, Ambri. At TED2012, he shared a breakthrough approach to the most elusive problem challenging renewable energy – storing large amounts of intermittent energy from solar and wind farms for use when these clean energy sources aren’t available. His work focuses on liquid metal batteries. As he described it over lunch with me that year, it is like taking an electric aluminum smelting plant and using it in reverse. 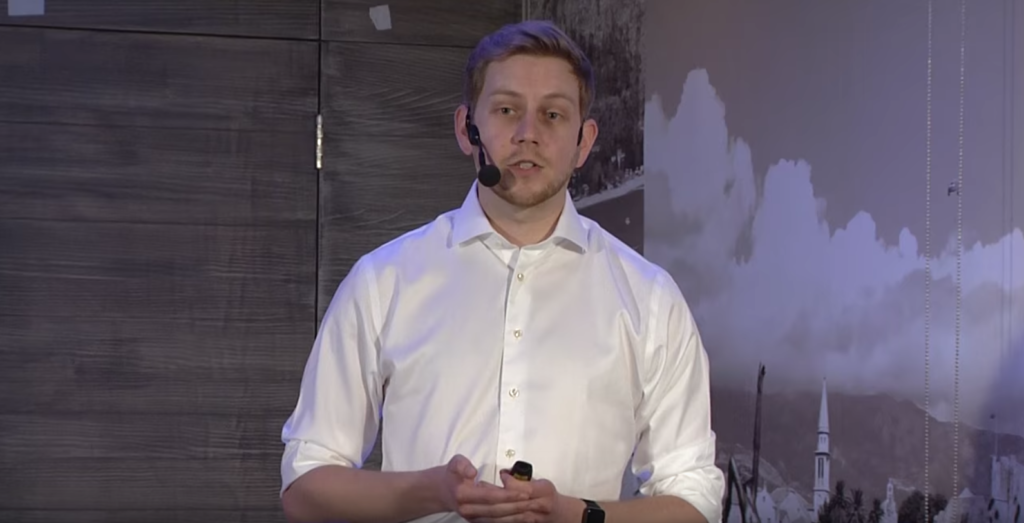 In his cleverly titled talk, Batteries Not Included, Marek hits on one of the most important and overlooked elements of the transition to clean energy – batteries and other kinds of electric storage. You might also want to check out his fantastic personal website to get a glimpse of that wide range of his projects. 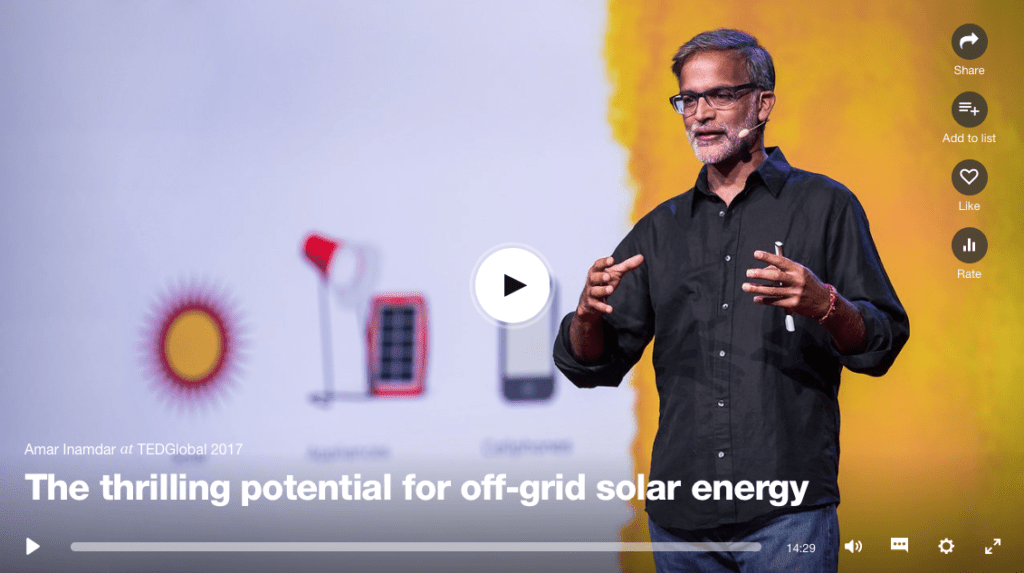 Amar is one of the most articulate and visionary leaders in the off-grid electrification industry. He is the head of KawiSafi, a Kenya-based venture firm that is building an ecosystem of high-growth businesses all focused on bringing the benefits of electric power to some of the world’s poorest people. His work has been featured in Freeing Energy with an interview in 2018 and a podcast in 2019. 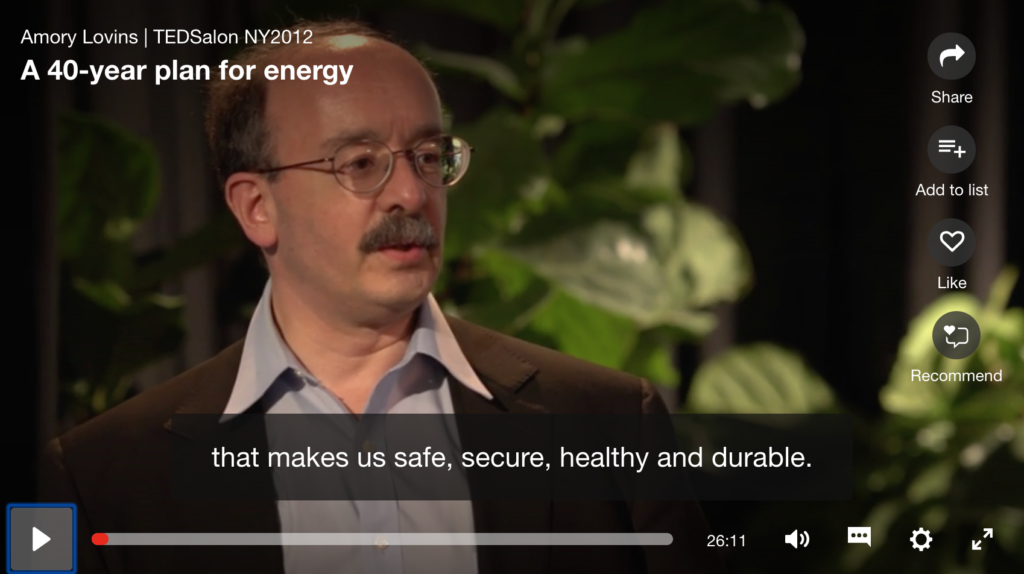 I first saw Amory on the TED stage in 2005 doing his talk on the “Winning the Oil Endgame.”  I was transfixed. From that moment, he became a hero of mine. He has a dry, brilliant sense of humor that forces us to reassess our most fundamental assumptions. He turns them upside down and shows a view of the world we’ve never seen before – and we are chuckling at his wit the entire time. His talk at a TEDSalon NY2012 captured his clean energy vision and lays out one of the most compelling and thoughtful plans for our clean energy future.

Amory is the co-founder and Chief Scientist at the renowned Rocky Mountain Institute, arguably one of the top clean energy think tanks (they say “think and do tank”) in the world. On a personal note, one of the highlights of my research into the Freeing Energy was a face-to-face interview with Amory Lovins at RMI’s headquarters in Colorado.

This is by no means the only list of energy-focused TED talks. Forbes published a list in early 2019 that kindly included my talk at the top. Other lists include: 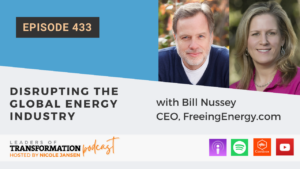 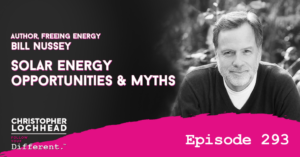 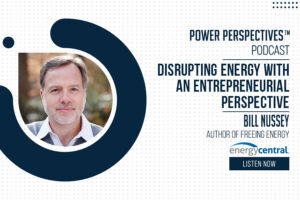