Bloomberg New Energy Finance Founder and Chairman Michael Liebreich shares his views on nuclear, solar, and the politics of energy 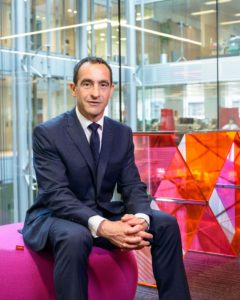 He grew up in London and attended Cambridge University to specialize in thermodynamics and nuclear engineering. After graduating in 1984, he became a member of the British Ski team and went on to compete in the world cups and the 1992 Olympics. Along the way, he got an MBA from Harvard Business School and worked at the uber consulting firm, McKinsey. Michael is smart and busy. He also seems to have a crystal ball.

In 2004, years before the rest of the market, Michael became convinced that clean energy would become competitive with traditional fossil fuels. To help usher in this tectonic shift in the world’s largest industry, he started a company called New Energy Finance. NEF provided information, data, and tools for financing and operations in the clean energy industry. Over the next five years, he grew the company to nearly 200 people. In 2009, he sold NEF to Bloomberg, LP, the mega-financial firm started by billionaire and NYC mayor, Michael Bloomberg. He continued on as the CEO and then Chairman of Bloomberg New Energy Finance (BNEF), ultimately leading it to become one of the clean energy industry’s most respected voices.

I recently spent some time with Michael to get his thoughts on the rapidly evolving world of energy and electricity.

On accelerating the shift to clean energy…

Michael explained to me, “It’s pretty easy to see how renewables will get to 50-60% of generation. We’ll probably blast right through it. But, getting the last 30-40% will be tough. Fortunately, we don’t need those answers today. There’s no reason to wait because we can’t even imagine what technologies we’ll have available to us in 2040.” (Michael has some good ideas for solving this challenge of the last 30-40% but that’s for another post)

“Solar will be down to 1 cent per kWh before we know it,” he told me. “But, even with super-cheap batteries, we can’t run 100% of the world on solar just yet.” Much of the Northern hemisphere simply doesn’t get enough sunlight during the winter to make solar viable. He said, “this isn’t about providing power for a night or even a few rainy days, this is about powering some parts of the world during an entire winter.”

He explained that we can power most parts of the world with super-cheap solar and batteries but to eventually power every spot on the globe, we’ll need new solutions like super-long power lines or new kinds of storage.

Michael is a supporter of nuclear energy and sees it as a great source of carbon-free “baseload” or “firm” power (where electricity is predictably available 24/7, regardless of weather). He said it makes no sense to shut down operating nuclear plants until other carbon-free generation sources are ready to replace nuclear’s huge footprint on the grid. But, he said, building new nuclear plants is an entirely different question.

In the US, new nuclear plants are just too expensive, especially since US power consumption is plateauing due to growing adoption of energy efficient products like LED lighting and next-generation consumer appliances. Nuclear could prove more valuable for countries like China and India where their electricity consumption and grid continue to grow. The challenge these countries face, he explained, is balancing safety as new nuclear power plants try to be cost competitive with coal and natural gas.

“Once every 15 years, something bad happens [with a nuclear power plant]. It doesn’t kill a lot of people but it scares the heck out of everyone. People are displaced. Massive cleanups are required. It has a huge impact on people’s lives,” he said. It’s critical that we never again have catastrophes like Chernobyl or Fukushima.

There are a host of new nuclear technologies being developed, many of which promise lower costs and better safety. However, these will likely take a decade to get to market and, even then, it will be many more years before we really understand the costs and safety implications. In the meantime, the costs of solar, wind and batteries will continue to fall.

“There is no place in the US where you need new coal except for inside the beltway.” — Michael Liebreich

A decade ago, at a time when most people were skeptical that clean energy could be commercially viable, Michael built a company that helped usher in the clean energy revolution.

Given his track record, we should all pay very close attention to the future he is describing now. For a sneak peek, check out the video of his keynote at the 2017 Bloomberg New Energy Finance Summit.