Islands: fruity drinks, sandy beaches, and the future of the electric grid (Part 1)

The shift to clean, local energy is a real challenge for many utilities. Their traditional planning models choke on the variability of solar and wind power. Self-generation from rooftop solar and improvements in energy efficiency threaten to end a century of revenue growth. Increases in extreme weather events are making blackouts more common. To get away from all these challenges, we will head to islands. Not for fruity drinks or relaxing beaches but because islands can give us a glimpse of our electric future. Islands are a microcosm of the mainland’s grids. They are showing us that clean energy grids are not only feasible but that they already working today.

There is a better business model for electrifying islands

I remember a trip to a Caribbean island years ago. We rented a boat to explore the island’s shorelines. After miles of beautiful beaches, we were shocked to see a large industrial complex covered in black grime. We quickly learned this was the island’s power plant.

It turns out that nearly all islands have plants like this. They are usually located downwind and out of sight from residents and tourists. And, they are all powered by diesel fuel shipped in from the mainland. Diesel is one of the most expensive, least efficient, and dirtiest ways to generate electricity. Island electric rates can easily be two- or three-times the average U.S. cost. For decades, this has been the only option – but no more.

The cost of wind and solar has dropped so far in the last decade, it is now cheaper than imported diesel for most islands. And if there is one thing islands have in abundance, it’s sunshine and breezes – the perfect fuel for clean energy. Most islands are finding that tapping their own local solar and wind energy is cheaper than importing diesel for their generators. In fact, as the cost of clean energy technologies continue to drop, the price gap with diesel is just getting larger. Over time, the gap has become so large that even the most risk-averse island governments are starting to pay attention. So, are economics of clean energy compelling enough to motivate islands to switch over? Not just yet. Many islands will stick with their tried and true diesel generators until they can solve a critical puzzle – how do you provide power at night and when the wind dies down?

Energy storage is the remaining piece of the clean energy puzzle

Just as solar and wind have plummeted in price over the last decade, battery storage has joined the downward slope. In fact, the cost of battery storage is dropping even faster. Batteries remove the last economic reason to run large scale diesel generators every day. Batteries mean that clean electricity can be stored and made available around the clock, regardless of the weather.
(note: most islands will still need a small diesel generator as a backup for the handful of times each year when the wind and sun remain weak for several days in a row.) 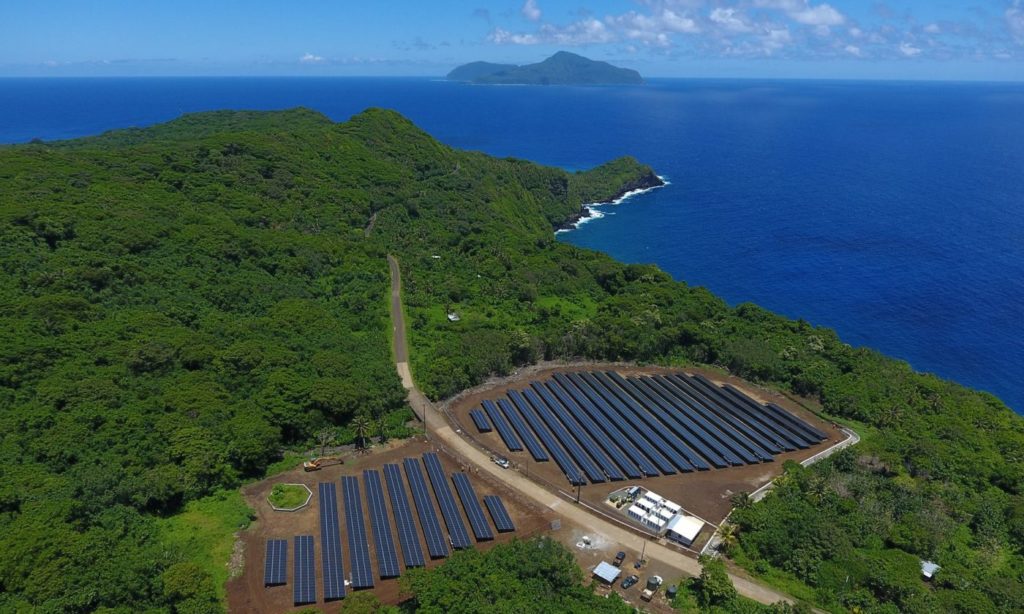 The promise of solar+battery has already been achieved on many islands but few have gotten more attention than the small island in the American Somoa called T’au. In 2016, Telsa replaced the island’s diesel generators with a solar and battery power plant. At the flip of a switch, the island shifted from 100% diesel to 100% clean energy from the sun. No more diesel imports. No more blackouts when diesel shipments ran late. No more pollution. Best of all, when the financing of the Telsa system is paid off, electricity on the island will be effectively free.

The clean energy club for islands is expanding quickly

Some experts believe that grids become unreliable with more than 30% clean energy. Island after island is proving this wrong. The tiny island of Eigg, off the coast of Scotland, has been running on 90% clean energy since 2008. El Hiero, an island off the coast of Spain, can now run for weeks on 100% clean energy. The Hawaiian island of Kauai gets 50% of its energy from solar and wind. And on sunny days, clean energy can meet almost 97% of the island’s electricity needs. Kodiak Island, off the coast of Alaska, is the second largest island in the U.S. A few years ago, the island eliminated $7 million in annual diesel costs and 99.7% of its electricity needs are now powered by clean energy. The list of pioneering islands is getting longer each year (there’s even a Netflix documentary series about this called Islands of the Future).

Clean energy grids are not only possible but they are already here. These small islands are proving that sun, wind, and batteries are a better, cheaper and far cleaner alternative to fossil fuels. But is the success of these small islands enough to prove that clean energy grids will work at scale? Can clean energy meet the needs of millions of people, large factories, and complex economies? In the next part of this series, I’ll look at the big island of Hawaii to understand the promise and perils of shifting from diesel power to clean, local energy at a much larger scale.

Excerpt from Freeing Energy book: What is it about?