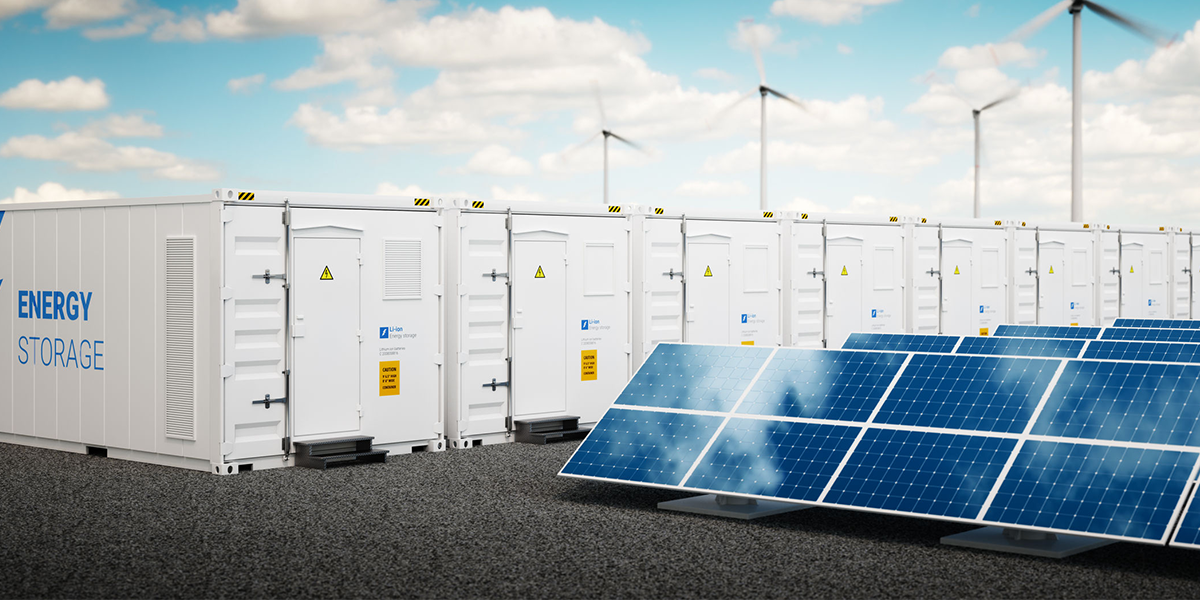 Despite incredible progress and a constant stream of headlines, the pace of clean energy is moving far too slowly. As of 2018, Solar and wind only provided 1.6% and 6.6% (respectively) of the energy on the US grid [1]. There are a number of reasons for this tepid pace:

But there is a single challenge underlying all of these and many people think it is the toughest nut to crack. It’s what the industry calls intermittency — the inconsistent and often unpredictable availability of sunlight and wind. As Bloomberg New Energy Finance founder Michael Liebreich says, “even 2 cents a kilowatt hour isn’t enough to motivate the sun to come out at night.” Even the staunchest clean energy advocates might demure if their televisions flickered off as the sun went down.

Electric utilities deserve tremendous credit for providing electricity 24/7/365. Unfortunately, they usually rely on fossil fuel power plants to backstop intermittent clean energy. These plants need to be spun up and down across each day to compensate for cloudy or windless weather. This is usually accomplished with natural gas “peaker plants” that are designed for quick changes in supply in demand. But the deeper intermittency challenge is seasonal. In most places in the US, solar only generates half the power during shorter winter days. This means the more solar on the grid, the more fossil fuel power plants are needed just for the winter. This is expensive and difficult to manage. There’s a frustrating irony in needing more fossil fuel power plants just to compensate for increases in clean energy.

Take a look at the diagram below. While the price tags are purely illustrative, they are directionally correct in terms of the trade-offs. Building $2 in solar actually requires another $2 of fossil fuel backstop that is largely needed during the winter. This is one reason utilities balk at adding a lot of solar. 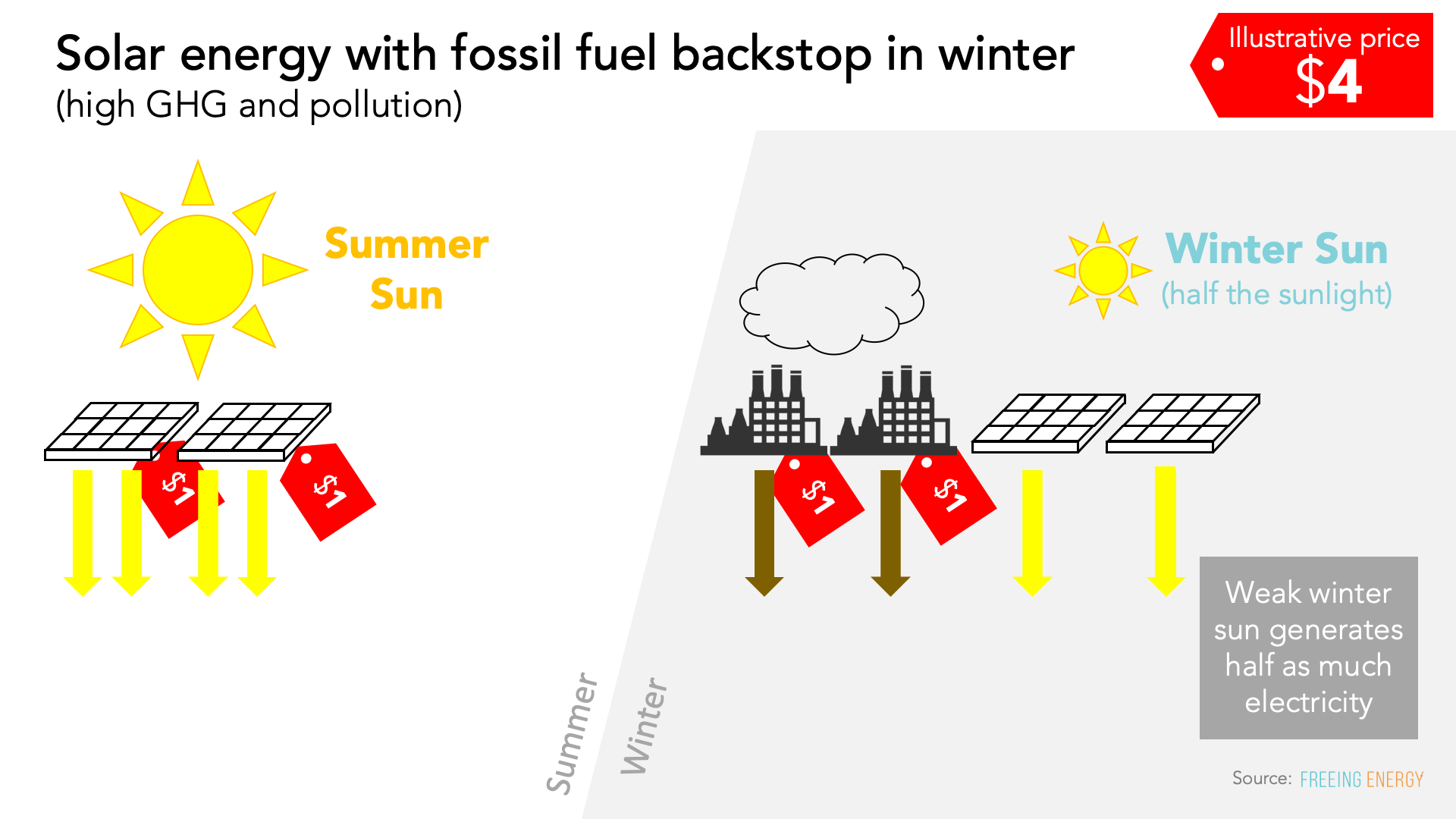 But wait, aren’t batteries supposed to solve this?

Batteries promise to replace these fossil fuel backstops and provide a clean counterbalance to the intermittency of solar and wind. But, batteries have their own challenges. Most experts believe that storing solar power across seasons requires more batteries than the world will ever produce and, even if they did, the costs would be impractically high. 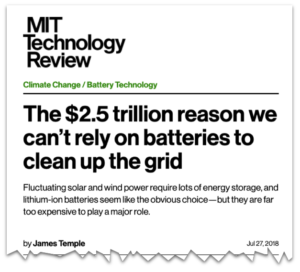 Bill Gates is a huge advocate for clean energy but even he is skeptical batteries can fulfill seasonal storage needs. In his 2018 end of the year letter, he said, “[S]olar and wind are intermittent sources of energy, and we are unlikely to have super-cheap batteries anytime soon that would allow us to store sufficient energy for when the sun isn’t shining or the wind isn’t blowing.”

Or as a recent MIT article titled, The $2.5 trillion reason we can’t rely on batteries to clean up the grid explains, “… batteries are far too expensive and don’t last nearly long enough, limiting the role they can play on the grid.”

The diagram below puts their concerns into numbers. For every dollar of solar, the grid would need 5-times, maybe even 20-times the investment in battery storage. Even batteries that are cheaper than today’s would render this clean energy strategy unaffordable. 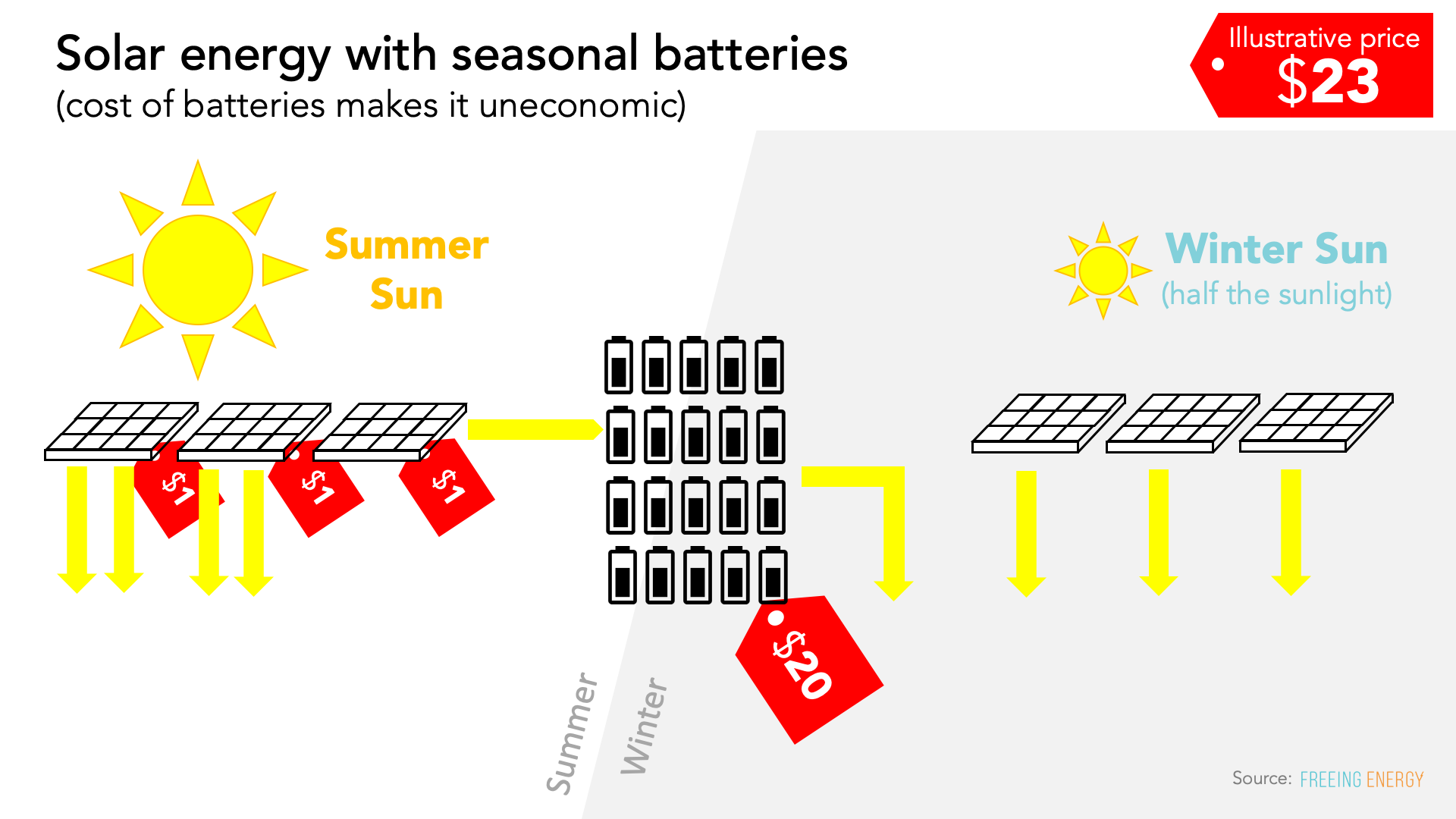 Why do experts think we need so many batteries? A century of experience managing the grid the has taught engineers to perfectly balance supply and demand – never producing more than is needed. For clean energy, the default approach is to generate the exact amount of power that will be needed across the year. Since the sun shines about twice as much in US summers compared to winters, it falls to batteries to store the summer solar all the way through to winter. Four to six months of all the US electric energy is massive so it’s not surprising that it would take more batteries than the world will see for years. But what if there was another way to approach this?

An innovative way to assemble the clean energy grid

Think of the grid as a Lego set. Most people follow the instructions and build the model pictured on the front of the box, like the Millennium Falcon or Death Star. But, it’s also possible to use the bricks in ways that aren’t necessarily obvious or conventional and make something even cooler, like a Podracer, or, a lightsaber, or even, a clean energy grid that needs a fraction of the storage claimed by experts. That’s exactly what Marc Perez and the team from Clean Power Research have done. Using the state of Minnesota as an example, they did the hard math and calculated that they could reduce up to 90% of seasonal storage by adding more clean energy than is required[2]. The diagram below shows that doubling solar results in a relatively small cost increase compared to the huge savings from fewer batteries. 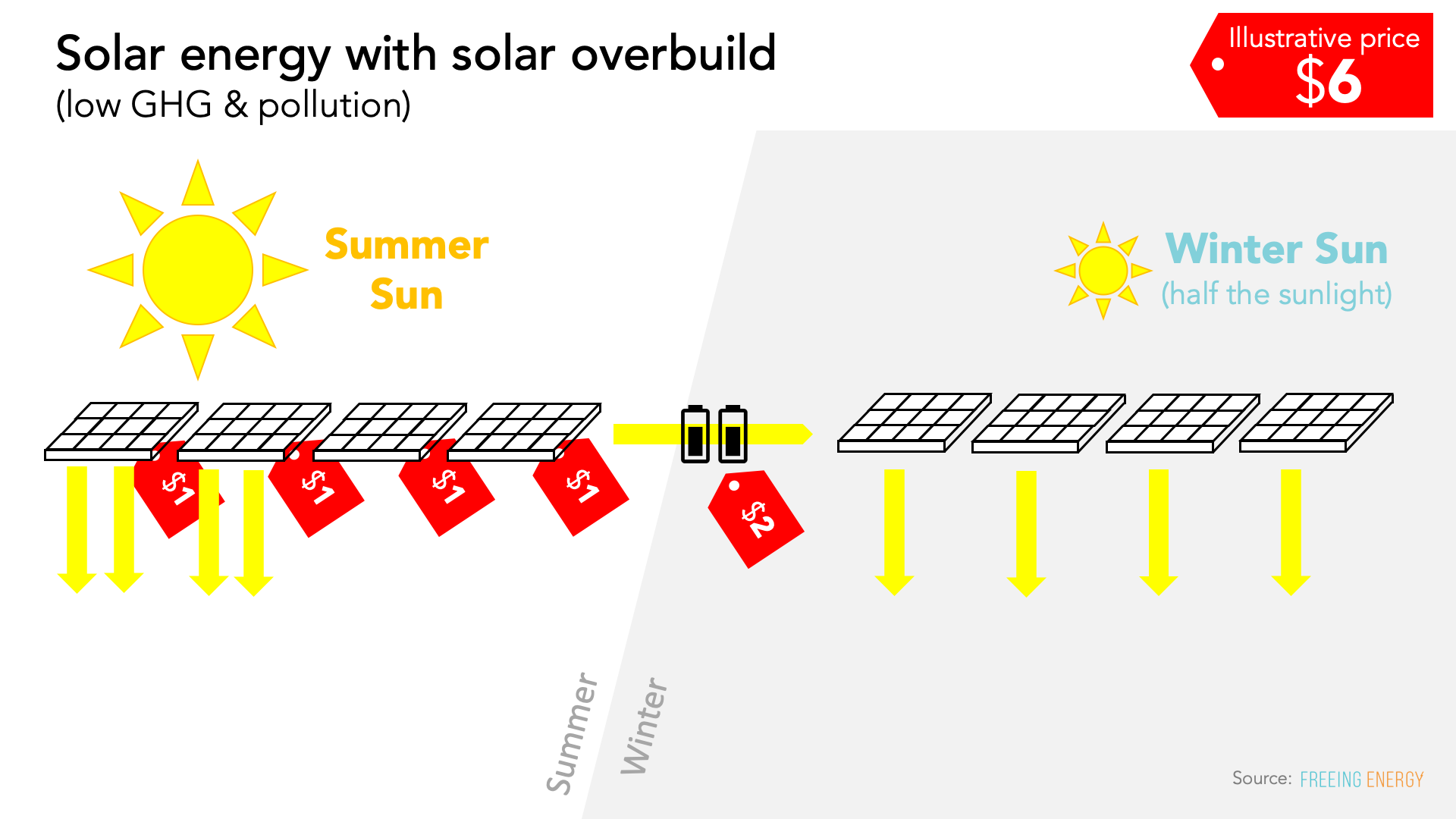 If you want to learn more about Marc Perez’s interesting background and the story behind his breakthrough work, you can check out the Freeing Energy podcast interview with him.

Marc and the Clean Power Research team prove out an idea that is actually pretty intuitive, at least if you’ve not spent your career designing grid architectures constrained by expensive fossil fuels. Rather than sizing your solar to match demands for a whole year,  you build extra solar and size it to power the grid during shortest winter days. Wallah, no seasonal storage required. Since solar is really cheap and batteries are currently pretty expensive, overbuilding solar actually ends up making a clean energy grid substantially cheaper.

At this point, traditional grid designers break out in hives, “but, but, you will now have a bunch of excess solar energy from the longer summer days… what are you going to do, throw it away?” In a nutshell, yes. This is the same kind of angst mainframe computer operators experienced 40 years when someone loaded in the punch cards behind schedule and the computer sat idle for a few minutes. Imagine how those operators would react if they knew computing would become so incredibly cheap that we draw frivolous screen savers with all the excess capacity.

It’s important to mention that excess summer solar will not actually go to waste at all. In fact, it will spawn incredible new businesses and business models. But, this will have to wait for future articles…

It turns out Mother Nature has a really clever plan. In most places in the US and across the world, Mother Nature turns up the wind just as the sunshine begins to fade. Solar works during the day but the wind is usually strongest at night. Similarly, solar is strongest in the summer and in most places wind is strongest in the winter. It’s like yin and yang or peanut butter and chocolate. Joshua Rhodes from the University of Texas at Austin has a fantastic animated graph of solar and wind across an average day that makes this clear.

Across the seasons in a year, the solar and wind are just as complementary. 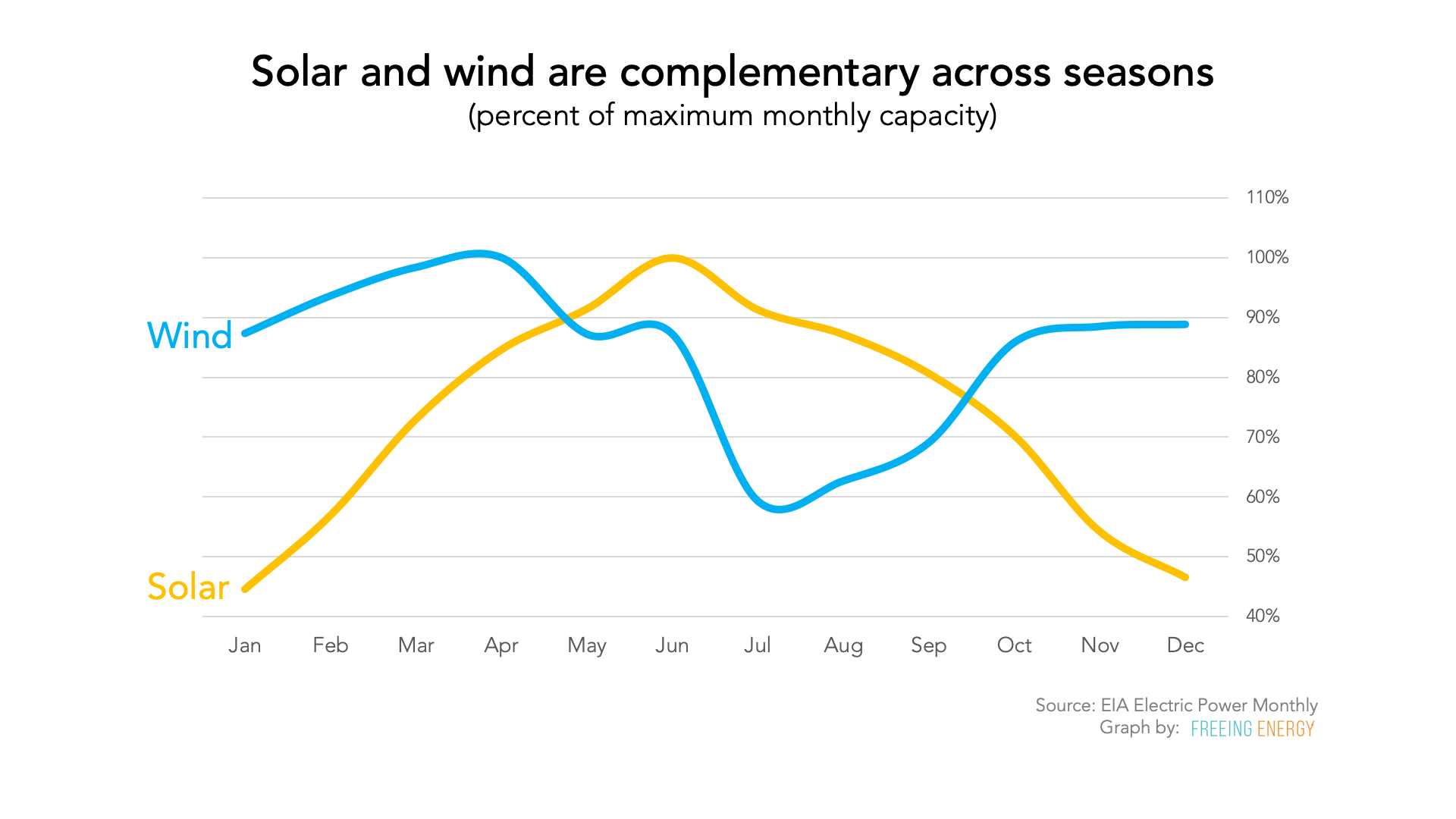 Like solar, the cost of wind has been decreasing steadily for decades. Wind and solar are now neck and neck for the cheapest source of electricity. By using them together, even less battery storage is required, both across the 24-hour day and across the seasons in a year. The diagram below shows even fewer seasonal batteries are needed when wind is added into the equation. However, wind is most cost-effective in certain regions in the US so adding a lot more wind requires big upgrades to the US transmission grid, taking the total system cost up a bit. 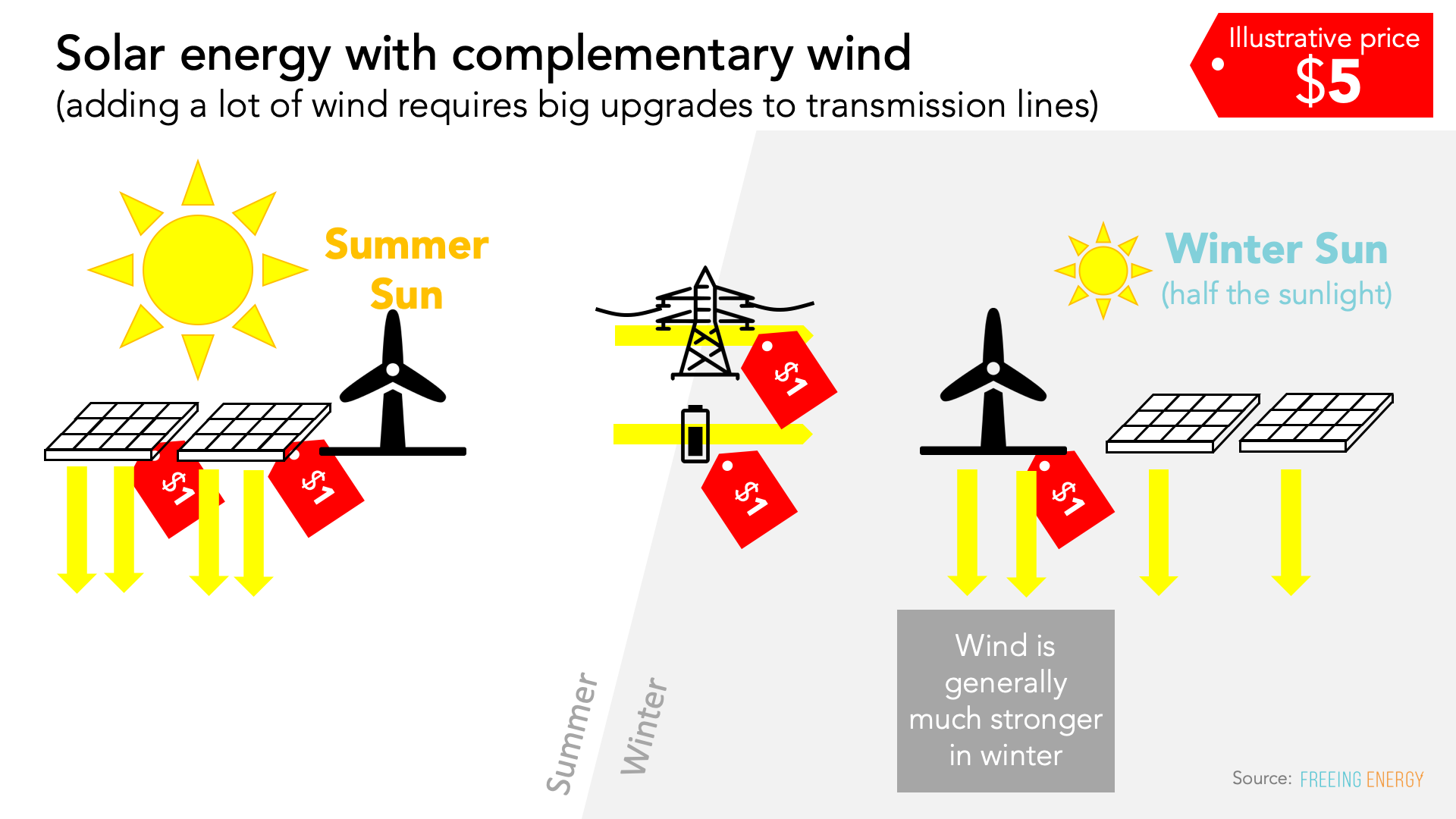 Even if this math works, is it possible to actually make all these batteries?

Even if we reduce the number of batteries required for a clean energy future, it is still a massive amount. Is it even possible to make this many? The answer is yes and we will get this level of global battery manufacturing faster than most people realize. Logan Goldie-Scot, head of energy storage at Bloomberg New Energy Finance (BNEF) told Greentech Media that in 2023, Europe will have almost 200 GWh of battery factory capacity, the US will have 130 GWh, and China will have a whopping 800 GWh that year. Altogether, this means that each year, the world will produce a staggering 1,200 GWh of new batteries. By comparison, Tesla’s famous gigafactory, the largest battery factory in the world today, is targeting a relatively small 35 GWh per year[3].

To be fair, most of the global factory capacity cited by BNEF will go towards making electric cars, creating enough batteries to build 20,000,000 electric cars per year [4]. But an even more exciting perspective on the tsunami of new batteries is that these numbers are not like oil, or coal, or any other fuel that gets used up each year, requiring more to be dug up the following year. The usable capacity of these annual battery numbers is cumulative. This means each year’s battery factory output adds to the total available battery capacity in the world. If we have 2,000 GWh in 2023, BNEF’s projections mean we’ll have 3,200 GWh in 2024 and 4,400 GWh in 2025 and so on.

What can we do with all these batteries?

Given BNEF’s forecasts, is it feasible to manufacture enough batteries to power the full US electric grid with clean energy from solar and wind? Using data from the US Energy Information Administration, the entire US consumes 5,735 GWh of electricity each night (on average) [5]. Building on BNEF’s forecast, the world’s battery factories will have created 5,600 GWh of cumulative storage by 2026, enough (at least on paper) for the US to be powered 24-hours a day from clean energy [6]. This is just 8 years away!

Even though BNEF’s battery forecasts are focused on electric vehicles, the sheer capacity and cumulative nature of batteries (vs fuels) mean we have the ability to readily create all the storage we need in relatively short order.

But, as Steve Jobs liked to say, there is just one more thing. A battery’s ability to store electricity decreases as it’s used. For current EVs, batteries fall to 80% of their capacity after five years. Most owners will opt to replace those batteries to get more driving range. So, what happens to all those 5,600 GWh of batteries after five years? They will almost certainly go towards powering homes, businesses and the larger grid. Even better, all those car loans will have been paid down after five years and all those old batteries won’t cost anything. This means that there will not only be enough battery storage to power the US grid entirely with clean energy but by 2031, that storage will effectively be free!

The promise of a clean energy future, powered by solar, wind and batteries, is far closer to reality than most people realize.

Is there anything that can make this happen even faster?

Clean energy has another huge benefit over the traditional power plants – solar and batteries are technologies, not fuels[7]. Fuels are subject to the economics of digging, burning, and disposing. Solar and wind are driven by something far more powerful called the Experience Curve, which says the more you make, the cheaper it gets [8]. This is why the cost of solar has dropped 300-times in the last 40 years and batteries saw their cost fall 85% since 2010 and 35% in 2018 alone [9]. 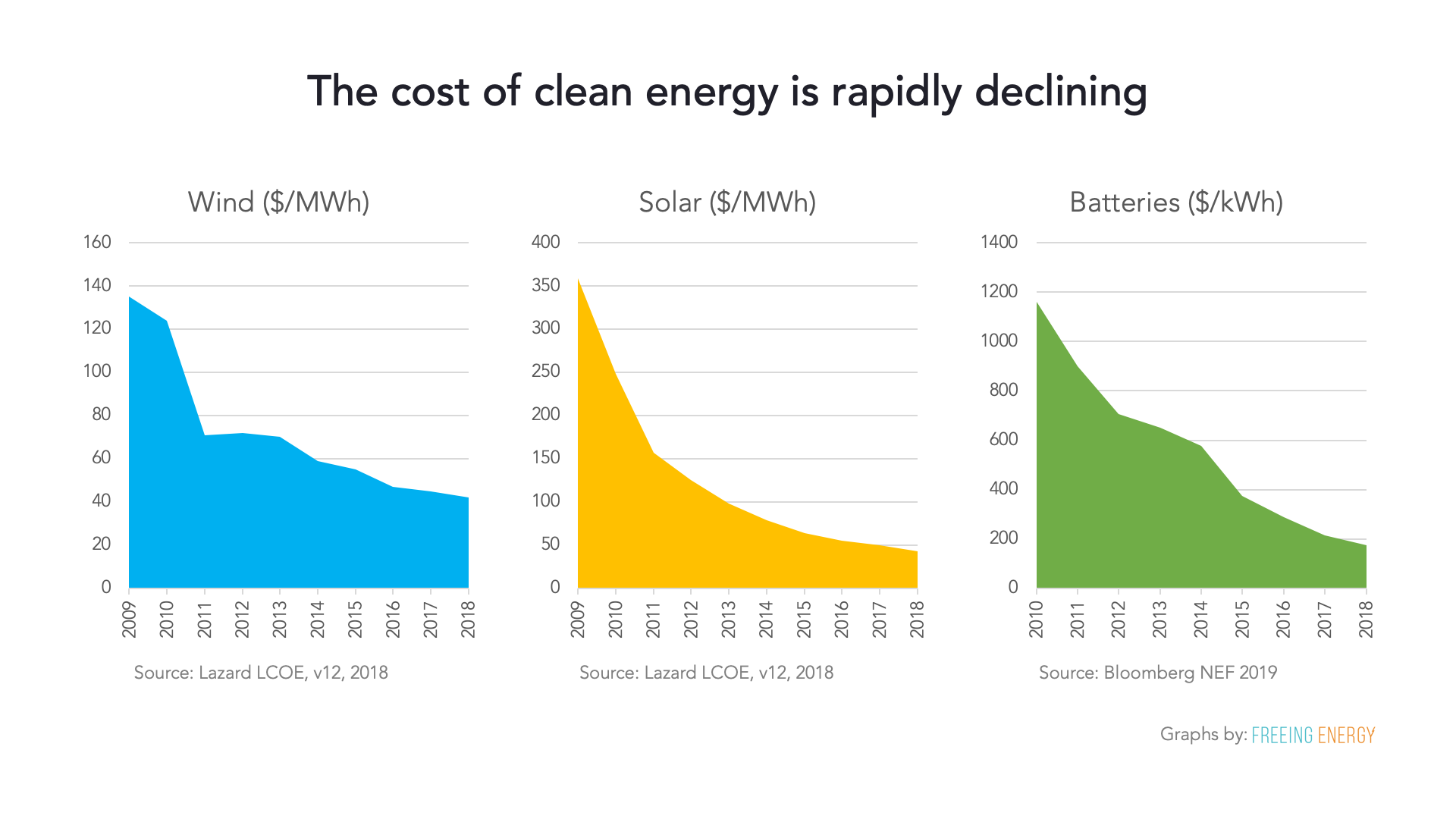 As these prices continue to decline, the final chapter in the clean energy future gets written. In the coming decade or two, not only will batteries solve the intermittency of solar and wind, but together, they will offer the cheapest way to power our planet. Good bye fuels. 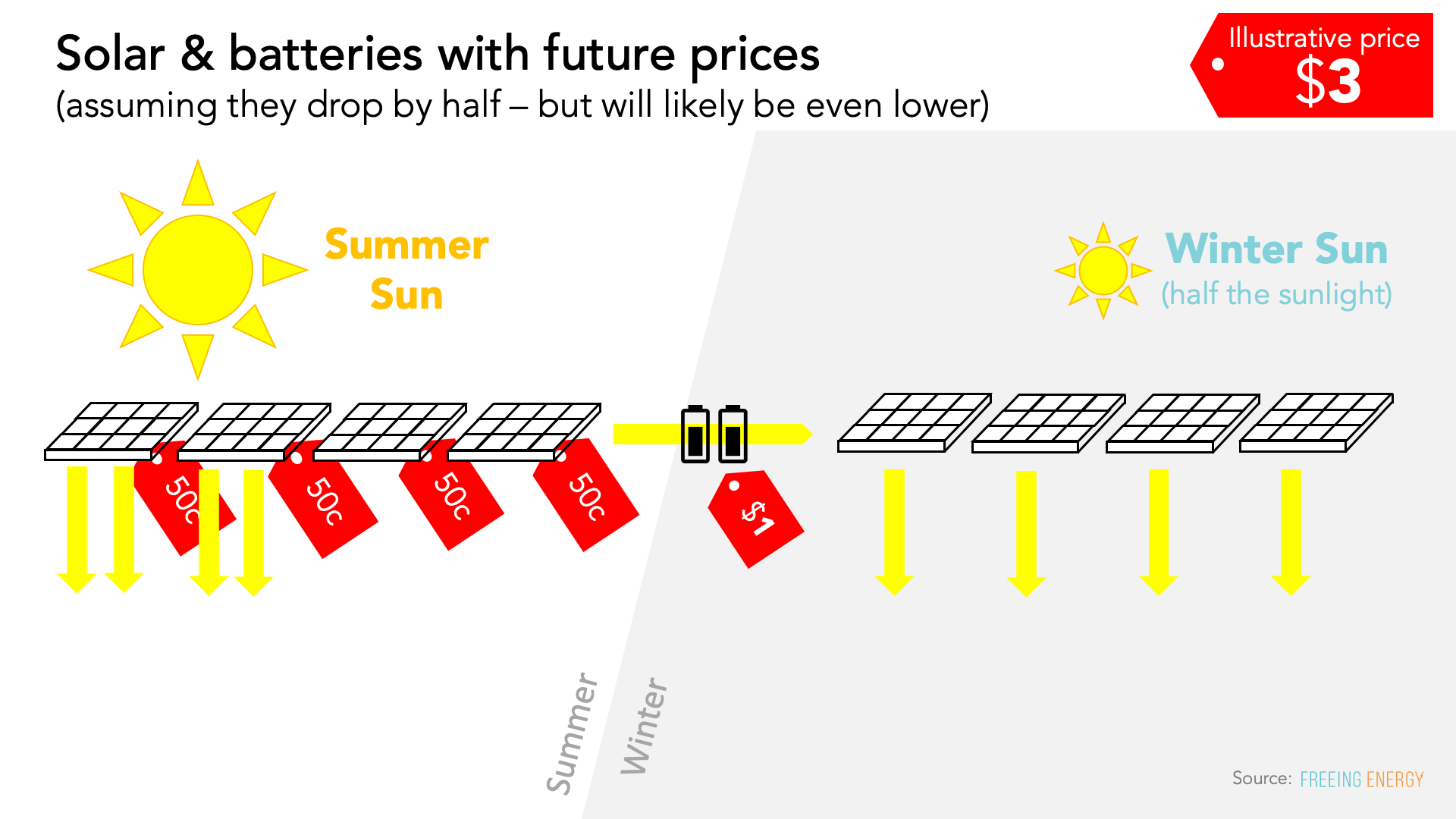