Five trends that will lead to the end of fossil fuels

The world is undergoing one of the greatest and most important energy transitions in history – a shift from fossil fuels to clean, renewable energy. If you read the daily news, you might get the impression that this transition will somehow be decided in government capitols and legislatures. The fact is that there are five trends driving this transition, and none of them require sweeping new legislation or technology breakthroughs. They are:

The Stone Age didn’t end because we ran out of stones. Similarly, the world will probably never run out of fossil fuels. But each time we extract a million tons of these finite resources, the next million becomes harder and more expensive to get. It’s like a barrel full of golf balls. At first, it’s easy to pull them out by the handful. But, the farther down in the barrel you have to reach, the more effort it takes to get each ball. At some point, it becomes too difficult and expensive to extract more. The only question is when does it become too hard?

What do experts think? To be super-conservative, we’ll use the forecasts from fossil fuel trade groups themselves (their answers may surprise you). British Petroleum Statistical Review of World Energy 2020 estimates 50 years of remaining oil reserves. The World Coal Association puts economically recoverable reserves at 150 years. And, the International Gas Union Global Gas Report 2020 predicts 50 years of viable natural gas reserves. For a deeper dive, including the 90-year forecast for nuclear fuel, you can read, If we used this much fossil fuel in Edison’s time, we’d have already run out. 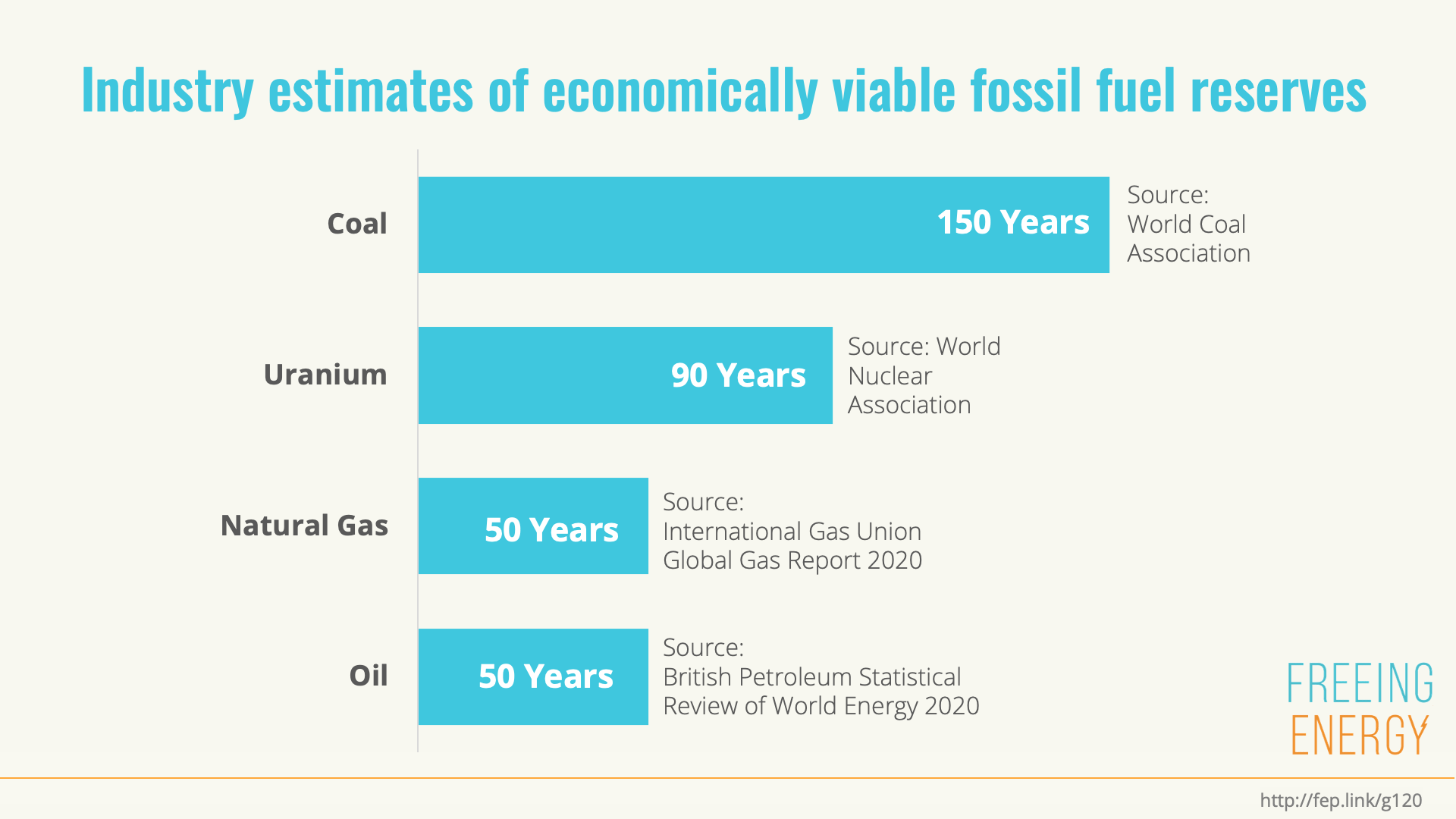 The cost of solar has dropped 300-times in the last 40 years. Wind power dropped 70% in the last decade. Batteries, which allow solar and wind power to work 24/7, saw their cost fall 85% since 2010 and 35% in 2018 alone. The cost of clean energy is only going to continue declining, making long term bets on fuel-based power plants a financial non-starter in most cases (see: Why does the cost of renewable energy continue to get cheaper and cheaper?).

The cost of electricity has been surprisingly constant the last 50 years so how is it that clean energy promises to push it downward so aggressively? The answer is simple: solar and batteries are technologies, not fuels. This means they have a lot in common with microchips. Both benefit from something called the “experience curve”, which means the more you make, the cheaper each new unit becomes. With 20 billion solar cells made each year, and the count of batteries catching up, these extraordinary volumes mean prices can get very, very low. 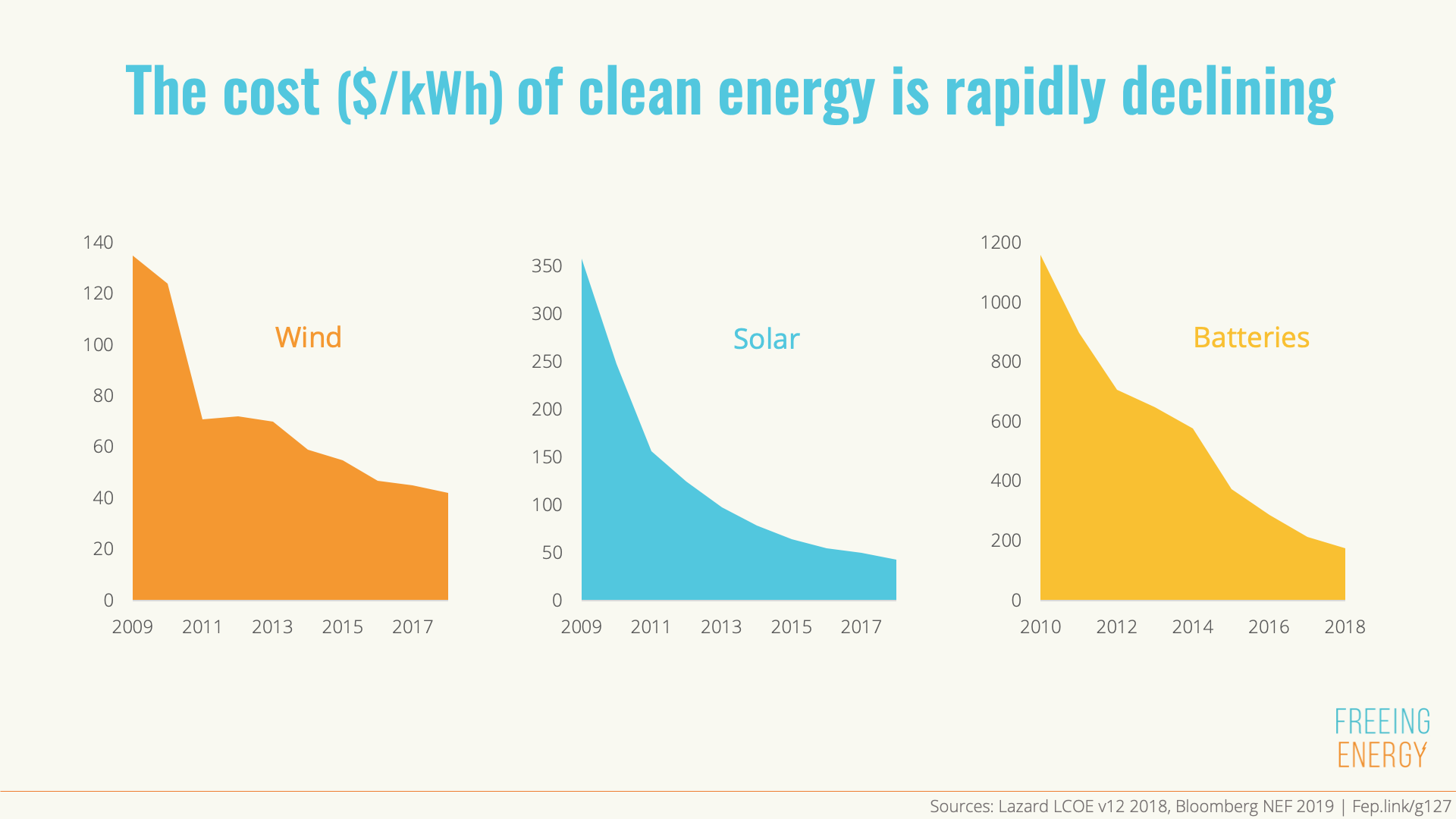 Third, money for fossil fuel projects is drying up 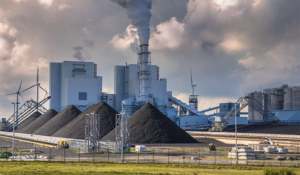 Extracting, refining and distributing fossil fuels requires massive amounts of capital. Investors are increasingly unwilling to provide it. Arabella Advisors reports almost 1,000 firms managing $6 trillion (trillion with a “T”) of funds have pledged to cease investing in fossil fuel assets and, more notably, divest the assets they already manage. This number has grown more than 100-times since 2014 and includes sovereign wealth, pension and insurance funds. The Institute for Energy Economics and Financial Analysis recently reported that “global capital is fleeing coal” with 40% of the largest global banks divesting their coal assets. Even China’s largest investment holding company, state-owned SDIC, has said it will “totally exit coal” and redeploy its capital into clean energy.

Some of these investors are responding to environmentally-minded stakeholders. But most are simply doing the math. Fossil fuel assets, like for example a coal power plant, need to produce steady profits for 30-40 years to make a return. Even if future expenses like carbon taxes or shareholder lawsuits are unknowable, the mere possibility makes the investment less appealing and more expensive. But the biggest concern is that fossil fuel assets could become akin to owning a vacuum tube factory in the age of transistors. Investors could be stuck producing a more expensive product that nobody wants. Jim Robo, CEO of utility giant, NextEra, speaking about clean energy alternatives said, “post-2020, there may never be another [natural gas] peaker built in the United States.” Look at this way: building an oil refinery or coal plant today is effectively making a bet that for the next 40 years, electric vehicles will not become cheaper than gas-mobiles (they are getting close) and that solar and wind power will not get cheaper than coal (it already is). If you were a bank, is that a bet you would take?

While public opinion survey results vary dramatically, there is one universal trend: the majority of people want to see fewer fossil fuels and more clean, renewable energy. A 2018 Gallup poll shows 73% of the US prefers “alternative energies” over 21% who prefer fossil fuels. This isn’t just along political lines. Non-partisan Pew Research Center conducted a 2018 survey which found 84% of Republicans favor “more solar panel farms” and 79% favored “more wind turbine farms” (compared to 93% and 91% respectively for Democrats). A survey by global energy company Orsted found three-quarters of the US wants to eliminate coal (96% want to eliminate it in China).

The electric utility industry even commissioned their own private survey. The findings were so astounding, they were leaked to the media. The utilities found that 70% of their customers agreed that “in the near future, we should produce 100% of our electricity from renewable sources such as wind and solar.” Astonishingly, over half the people surveyed believed that 100 percent renewables is still a good idea even if it raises their energy bills by 30 percent.

People are putting their preferences into action with their dollars. A Deloitte Consulting survey found that 7 in 10 businesses say their customers expect them to use renewable energy. Over 170 major US companies have signed onto RE100, a pledge to get 100% their energy from clean, sustainable sources. This growing list includes Ikea, 3M, NIKE, Anheuser-Busch, General Motors, Goldman Sachs and Starbucks.

People are also exerting their preferences at the ballot box. More than 130 US cities and counties have publicly committed to 100% clean energy. Even bigger, New Mexico, Nevada, California, Hawaii, Washington DC, Puerto Rico, and Hawaii have all committed to 100%. 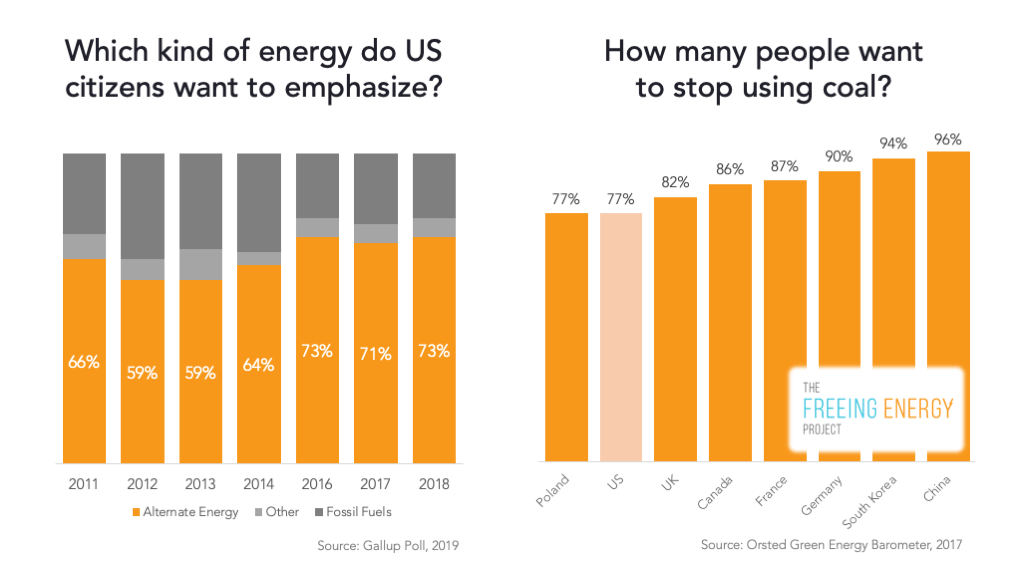 Fifth, the decision makers are changing

Even with a broad majority of people wanting to move beyond fossil fuels, the best they could do was influence and advocate to the real decision makers. This was a long, winding process through corporate board rooms and government bureaucracies. But this is changing. Even though most of them don’t know it, a new set of decision makers is emerging. They can move swiftly, with less risk, and with virtually no allegiance to the incumbents who are fighting to protect their century-old business models.

You might be surprised to learn the new decision makers are all of us: homeowners, small businesses, neighborhoods, campuses, and virtually any community that wants to lower costs and help the environment. For the first time in history the cost of generating our own electricity is dropping below the price of buying it from the grid – and, in nearly all places, we are perfectly free to do it. For the first time, the decision to reduce our reliance on fossil fuel power plants is something each of us can make ourselves.

What does all this mean?

Individually, these five trends are methodically driving the largest energy transition in history. Taken together, however, they build on each other and accelerate the pace of change. Cheaper alternatives make it politically easier to pass new laws; new laws make it easier to adopt more clean energy; and ever-increasing volumes of solar and batteries further lowers their price.

Laws and regulations can slow down or speed up the demise of fossil fuels but the finish line will always be the same – a world powered almost entirely by the sun, wind, batteries and other sources of sustainable energy we haven’t even dreamed of yet.