AC vs DC: How better economics ultimately beat out a bizarre publicity campaign (Part 2 of 3)

This is the second in a three-part series on the origins of the modern power industry. Part 1 can be found at How Edison, Tesla, and other visionaries invented the modern grid.

The sparks that started the AC/DC current wars

By the late 1880s, Edison was on his way to dominating the rapidly growing power industry. He had locked in hundreds of patents. He sent teams of lawyers and threatening letters to anyone who infringed. His name was synonymous with American ingenuity and success. He seemed unstoppable.

The only way to compete with Edison was to create an entirely new kind of grid. One not covered by his patents, but still able to light homes and turn motors. As it turns out, that was exactly what Edison’s previous employee, Nikola Tesla, was working on.

The year was 1882. On a sunny day in Budapest, Nikola Tesla was out for a walk when he was struck with an extraordinary idea. He grabbed a nearby stick and feverishly drew his vision in the dirt: a blueprint for an electric motor that could run on an entirely different form of electricity and on an entirely different kind of grid. Five years later, Tesla’s vision would manifest as the world’s first practical alternating current motor and the first real threat to Edison’s patent stronghold on the very industry he had invented.

Alternating current, or AC, differs from the steady flow of direct current (DC) by going back and forth dozens of times a second. While free of Edison patents, AC was full of challenges. It was harder to manage and harder to measure. Very few people understood it. And, worst of all, it was thought that AC could not be used to power large motors. This limitation kept most serious investors away.

On the other hand, AC had one amazing benefit over DC – a device called a transformer could change AC voltage levels on the fly (transformers don’t work with DC). The implications were profound. AC power could be stepped up to very high voltage (and low current) and sent over long distances without losing power from overheating. It could then be lowered again for safe use in a house. Where fixed-voltage DC was limited to a few city blocks, transformers allowed AC to be delivered over dozens of miles. This meant power plants could be made even larger and more centralized. This, in turn, drove better economies of scale which further lowered the cost of electricity. It is an ironic twist that AC had the potential to use Edison’s own central generation business model to beat Edison at his own game. The only thing the AC was missing was the financing to create a complete, integrated AC grid solution.

Enter American engineer and entrepreneur George Westinghouse. Equipped with a new fortune from commercializing railway air brakes, Westinghouse saw electrification as an enormous business opportunity. He partnered with Tesla, purchased his patents, and invested his fortune into creating a better grid. Within a few short years, Westinghouse and Tesla’s AC grids were being installed across the country.

As you might imagine, this was not welcome news to Tesla’s former employer, Thomas Edison. Edison’s enormous stake in the emerging power industry relied entirely on the public’s acceptance of DC as the only way to distribute electricity. All of his patents, from switches to meters to centralized power plants, were built for DC. Knocking down that one domino could undermine Edison’s vast electric empire.

The “War of Currents” gets gruesome

And so, Edison went to war. He launched a series of guerrilla-style attacks to stop Tesla and Westinghouse before their AC grid gained more momentum. Edison’s primary weapon in this “War of the Currents?” Publicity stunts. His goal was to convince a public still unfamiliar with electricity that AC was lethally unsafe.

Edison started small in what would soon get grossly out of hand. At first, he rallied boys in his neighborhood to bring him stray dogs in exchange for 25 cents a day. Surrounded by onlookers, Edison would set a bowl of water charged with AC power in front of these poor dogs, who would quickly die from the electric shock. He even popularized the phrase “getting Westinghoused” to stoke the fears around AC power. But he was just getting started.

Topsy the Elephant remains Edison’s most infamous non-human victim (yes, I said “non-human” for a reason). In 1903, Edison put on a ghastly show for 1,500 people at the Luna Park Zoo on Coney Island. Engineers rigged Topsy with her very own pair of electric sandals and wired them to a high voltage generator. A switch was thrown. 6,600 volts rushed through her body. The elephant was killed instantly.

Edison gets a low-voltage shock of his own

Edison was an outspoken opponent of capital punishment. But the looming threat to his DC empire blurred his values. Edison saw a grisly opportunity. After New York State decided to adopt electrocution as a form of capital punishment, it was Edison who secretly funded the construction of the first electric chair in order to ensure it was powered by AC. And despite a legal team funded by Westinghouse attempting to overturn his death sentence, William Kemmler was the first unfortunate soul to experience the electric chair.

Unfortunate is an understatement. On August 6, 1890, as the execution commenced, things went horribly wrong. The first application of 1,300 volts caused Kemmler to convulse and even burn, but it did not kill him. Horrified, officials scrambled and four minutes later, applied a second round of electricity, this time 2,000 volts. Things were even more gruesome this time around but it finally put Kemmler out of his misery.

Meanwhile, Westinghouse’s business continued to grow, taking more and more market share from Edison’s DC technology. Within a year, AC power had captured 50 percent of the electricity market. Westinghouse’s coup was likely the Chicago World Fair in 1893. Edison and J.P. Morgan’s General Electric placed a bid to power the fair with DC for $554,000 but lost to Tesla and Westinghouse, who offered an AC solution for just $399,000 (over $11 million in current dollars). Aside from its long-distance range, versatility, and cost-effectiveness, AC’s victory can be partly attributed to Edison’s ties with the Kemmler fiasco, which left an understandably bad taste in the minds of the general public. 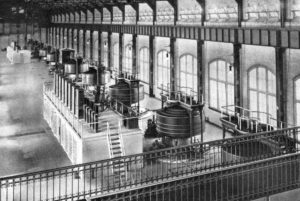 The final nail in DC’s coffin was a waterfall victory – literally. Shortly after the World Fair, Westinghouse won the bid to build ten 5,000-horsepower AC generators that powered the hydroelectric plant at Niagara Falls. This massive project was only possible at such a scale with AC. Construction was completed in 1896, and on November 16th of that year, AC was being sent 26 miles away to deliver power to the entire town of Buffalo, NY. By 1902, Niagara Falls alone was providing a fifth of the nation’s electric power, all thanks to AC’s ability to travel across vast distances.

The lasting consequence of the current wars and AC’s mainstream victory was the emergence of a new America – one in which electricity could be distributed far and wide at a cost affordable to millions of people.

Stay tuned as I explore the birth of the modern utility monopoly business model in the final post in this series.