Choreographing electrons and the hidden sophistication of the US electric grid

Flip the switch. Your light turns on. Simple, right?

Actually, the light switch is straightforward but the system behind it is anything but simple.
When you flip that switch, you are instantaneously connecting your bulb to the most sophisticated machine ever built.

If you want to understand electricity, the best approach is to follow the wires. So, let’s start where most electricity starts – power plants.

How does the US make its electricity?

There are about 7,700 power plants in the U.S. Together they generate an incomprehensibly large 4 petawatt hours of electricity each year. To put this in perspective, think about a 10 watt LED light bulb. One year of US electricity could power 458 million of these bulbs… for a century.

So, where do these 4 petawatts come from?

Most US power plants are powered by natural gas, coal, and nuclear power. Wind and hydro are relatively smaller and, as of 2017, solar barely moves the needle. 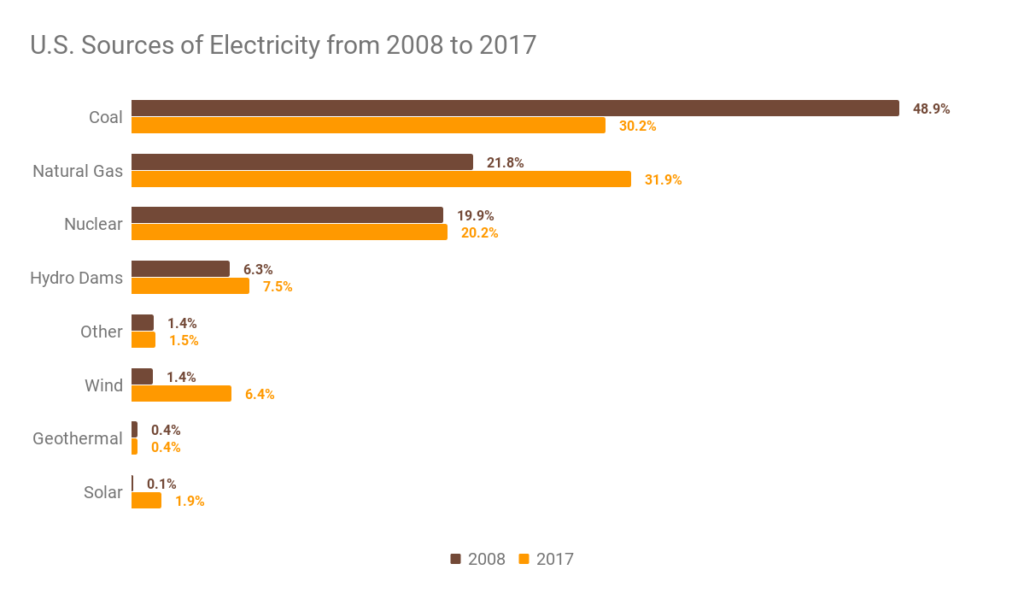 The electricity generation story is a bit more interesting if you look back over the last decade. Natural gas power has risen dramatically, largely due to plummeting fuel prices. With coal no longer the cheapest option, half the US coal plants have closed. No new nuclear plants have been built for decades. Nearly all the cost-effective locations for hydro dams have already been built. Beyond natural gas, the big story is clean energy. Wind has grown more than fourfold. And, solar’s growth has exploded. There is almost 500-times more solar in 2017 than there was in 2008!
Of course, clean energy still provides too little of US power but at least it’s heading in the right direction.

Delivering the electricity to your light bulb

Once the electricity is generated, it needs to get delivered to your house. It’s easy to think of this as simple power lines, but delivering electricity is actually pretty complex. The industry refers to all this as T&D, or “transmission and distribution.” This includes all the power lines, transformers, and other gear that delivers electricity from the power plants to your light bulb.

Substations are the next step in T&D. There are 55,000 of them across the US. Think of those mad scientists’ laboratories in 1950’s sci-fi movies and you have a good idea of what a substation looks like.  They are full of giant gray boxes surrounded by fences, with thick wires going every which way.  Substations take the very high voltage from transmission lines and step it down to a safer level for local delivery. If T&D were roads, substations would be the off-ramps that connect the highways to the surface streets. 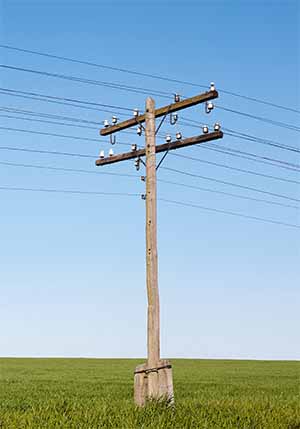 The third part of T&D is the distribution system.  The most visible parts of distribution are those iconic wooden power poles. There are 6.5 million miles of distribution power lines across the US.  They carry electricity at a few thousand volts – high enough to travel mid-sized distances without being lost to heat.

The last step in delivering electricity to your house is a transformer. These are typically gray cylinders that look like 3-foot pill bottles sitting at the top of power poles. Transformers convert the thousand volt power from distribution wires down to 120 and 208 volts that powers your house.

The big challenge is “to choreograph all those electrons.”
— Danny Kennedy, the Managing Director of the California Clean Energy Fund (CalCEF)

Among all the innovations that make modern life possible, electricity stands unique.

Gasoline can be stored in tanks until people need it. Food can be refrigerated until it’s ready to be eaten. Water sits in reservoirs until you turn on your faucet. Only electricity is “just in time.”
Storing electricity is only now becoming cost-effective so, for a century, electricity has been created the moment it was needed. Every time a light is turned on or a dishwasher starts, the electricity required has to be instantaneously generated at a power plant somewhere. Too little electricity and you get brownouts and blackouts. Too much electricity and circuit breakers flip, or worse yet, a fire starts and people get hurt. Matching the output of thousands of power plants to the second-by-second electricity needs of millions of homes and tens of millions of devices requires exquisite choreography. The fact that electricity is affordable and available non-stop explains why the National Society of Engineering calls electrification the single greatest engineering achievement of the century.

Despite continuous growth in demand, the power industry has managed to keep electricity affordable and reliable for a century. It is something the industry is rightfully very proud of.

Utilities make all this work by focusing on two core principles: centralized control and the law of “bigger is better”. Traditional power plants like coal, nuclear, and natural gas work particularly well with these principles. The bigger you make them, the cheaper each kilowatt-hour of electricity becomes.  These kinds of plants also provide another valuable service called “baseload power.” This is the industry’s term for plants that produce massive, steady, predictable volumes of electricity. It means utilities have total control over power output. As demand changes throughout the day, “dispatchable” power sources can be turned on and off in real time to match it. The industry even has specialized power plants called “peaker plants” (typically natural gas) that are specifically designed to fulfill rapid, minute-by-minute swings in demand.

Tying the dancer’s shoelaces together

As the sun set on the end of the 20th century, the grid seemed like the ultimate example of a hundred years of finely tuned engineering. Who could complain?

Well, the rising sun of the 21st century shone a new light on the grid. The power industry began to realize their prize creation had some serious blemishes. Almost overnight, the world became deeply concerned that extracting coal, nuclear, and natural gas was polluting streams, aquifers, and the surrounding air. The world also realized that burning coal, nuclear, and natural gas was creating a lot of nasty waste products like radiation, pollution, and greenhouse gases. And, as those waste products accumulated, they were beginning to impact the health of people and the health of the planet.

Fortunately, around the same time frame, cleaner types of energy generation were emerging.
After decreasing for decades, power from the sun and wind both became cost competitive with traditional power plants in 2016. But nothing is ever simple. Despite competitive costs, solar and wind power brought huge new challenges to the orthodoxy of managing the grid – they are intermittent. This means they aren’t easily used for baseload and they are not dispatchable.

As much as utilities like to control everything, they weren’t able to make the wind blow and the sun shine whenever they needed more power. While clean energy offered some solutions to the 20th-century problems, it created an entirely new set of 21st-century problems.

Untying the shoes and learning to dance

If you’ve been fine tuning a “bigger is better” and “central control” system for a century, you might be reluctant to toss out your models and start over. But that’s exactly what some utilities and organizations are doing. And for most of them, it’s working remarkably well.

The technology to control the 21st-century grid absolutely exists. It has for decades.
It’s the same kind of digital control systems that virtually every other aspect of business and society has embraced. There are countless metaphorical stop lights, rest stops, bridges and roundabouts to help build a better, more resilient, and lower cost gird. It’s just that the people who control the metaphorical highways are reluctant to take risks on a system they’ve spent a century putting in place.

Why we created the Freeing Energy Project

The Freeing Energy Project was created precisely because of this reluctance. Our mission is to find the clean energy pioneers and help share their stories. We want to cut through the myths and misunderstandings. We want to clear out the politics and ideologies. We want to highlight the simple facts of the 21st-century grid with the stories of heroes who are already building the 22nd-century grid.

It’s not just that we can have cleaner energy. It’s that we can get it much faster than we are now.
And, as we do, the grid will become more reliable, more secure, and less expensive than anything the 20th-century model could have ever provided.