What is the secret behind China’s low cost solar panels?

Chinese companies lead the world in low-priced solar. The flood of inexpensive Chinese panels has accelerated the installation of solar projects across the world but the low prices have also driven several U.S. and European solar manufacturers out of business.

The incredible success of Chinese solar has raised big questions across the spectrum of business, political and trade leaders. In fact, earlier this year, Suniva and SolarWorld, the two remaining U.S.-based solar-panel manufacturers went bankrupt. On May 25, 2017, the creditors of SolarWorld joined the creditors of Suniva, to file a trade case against solar panels made outside the U.S. (see my blog on the solar trade case).

More than any time in renewable history, the world is asking: Is China just better at manufacturing or are Chinese companies somehow competing unfairly?

I went to China to find out.

Are Chinese companies selling at a loss? 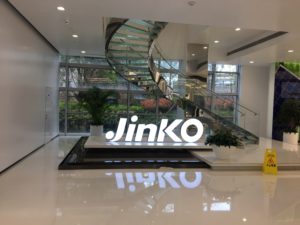 In the Shanghai headquarters of Jinko Solar, I asked Gener Miao, Jinko’s SVP of Sales and Marketing, how he responds to the claim that Chinese companies sell solar at a loss. Gener responded, “This question comes up all the time.” He said, “Four of the five largest solar manufacturers in the world are Chinese. They are all publicly traded on U.S. stock exchanges. Go take a look – they are all profitable.”

I checked: Jinko Solar, Trina Solar, Hanwha and JA Solar are all profitable (Trina was profitable before it went private).

Probably not. Solar manufacturing is increasingly automated. It doesn’t matter where solar cells and panels are built, labor is a smaller and smaller part of the manufacturing process. It’s not uncommon to see labor costs as low as 5% of total solar panel costs. On a factory visit outside Shanghai, I counted less than two-dozen people working several solar panel assembly lines. In fact, Chinese labor costs have gone up so much in recent years that Mexico is now cheaper per hour than China. If your product requires a lot of labor, China is not the cheapest place to build it.

This is the toughest and most contentious question. While in Shanghai, I sat down with Herman Zhao, the CFO of JA Solar. Herman’s education and career spans continents. He received his undergraduate degree in China and his MBA in the U.S. He has worked in several Chinese companies but has also held executive jobs in several Silicon Valley companies. 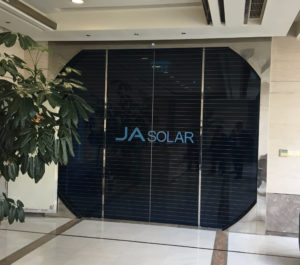 I asked Herman whether the Chinese government was particularly generous towards solar companies like his. He said, “Yes but it’s no different than the rest of the world. In the U.S., states and cities will offer incentives to attract high growth companies. Chinese provinces do the same thing.”

Herman’s answer makes sense but most experts would add that China’s banks regularly take much larger risks and can be more patient than their counterparts in the other countries. This gives Chinese solar manufacturers opportunities to build out larger factories more quickly and to better weather solar’s notorious boom and bust cycles. So, yes, China’s government and banks are more generous but it doesn’t seem to be enough to explain the huge price advantages JA, Jinko, and others are offering the world market.

If it’s not losses, labor or subsidies, how is Chinese solar so cost competitive?

As I sought the answer to this question, several industry insiders pointed me to the same person: Andy Klump. Andy is the American-born CEO of Shanghai-based, Clean Energy Associates. CEA is a highly specialized supply chain and engineering services firm that focuses almost entirely on solar cell and solar panel manufacturing. [Full disclosure: I was so impressed with CEA’s expertise, I later joined their board.]

Andy explained to me, “China’s tremendous success in low-cost solar comes from two things. First, no other country or region can match China’s unique supply chain. Second, China has built enormous solar manufacturing capacity that no one else can rival.”

This powerful insight has been echoed from a wide range of U.S. and European analysts as well as the Chinese manufacturers themselves. Gener Miao of Jinko Solar put it in very practical terms, “We build solar all over the world but China is the only place where every component we need is available just a few kilometers away. If we need something, we can get it in an hour. No shipping. No contracts. It just shows up in a pickup truck. The key is to keep our factories running continuously and, in China, we have everything we need close by.”

The other key for Chinese companies is the enormous capacity of all their factories. Similar to a roll of toilet paper being much cheaper if you buy it in a 24-pack from Costco, the more solar panels you can make at once, the cheaper each panel becomes. There is even a rule for this called “Swanson’s law”, which says that for every doubling of volume shipped, the cost goes down 20%. In other words, the more you make, the better you get, and the more costs you can remove.

At their peak a few years ago, U..S-based solar manufacturing totaled about 1 gigawatt of capacity per year (one gigawatt is roughly enough to power 250,000 American homes). By comparison, China is expected to have 51 gigawatts of factory capacity by the end of 2017. That is 50-times more than the U.S. at its peak. Even a small application of Swanson’s law suggests that China’s solar manufacturing capacity is a big source of their price advantage and one that any other country will be hard pressed to beat.

The U.S. government will try to answer the question of Chinese solar later this year

The trade case filed by Suniva and Solar World claims that low Chinese solar prices are harming U.S. manufacturers. The facts of this case are incredibly complex as are the politics surrounding it. An initial answer is due from the U.S. International Trade Commission in late September of this year. Then it’s off to the President to determine what, if anything, should be done.

The implications of import tariffs are likely to be material and are covered in my other post here: The section 201 trade case, Donald Trump and the $25 billion solar cliffhanger.