If you drive North up Highway 85, the last exit in Georgia will lead you to the town of Hartwell. This town of 4,500 people was founded in 1854 and consists of a few downtown blocks and miles of surrounding farmland. Among those farms and not too far from Lake Hartwell, you’ll find my family’s weekend house. In a world full of Xbox’s, Uber and organized school activities, this property offers our kids a great balance with dirt bikes, homemade forges, tree houses, and bonfires.

Over the last decade, we have slowly renovated and upgraded the property. And, in the spring of 2016, we decided to take the leap into solar power.

The first step was to find a company that specializes in solar installations. Georgia has several world-class solar developers but only one is run by my old friend, James Marlow – Radiance Solar. It was an easy choice.

In early spring 2016, Radiance did their research, measured our house and designed a best-of-breed system. They worked with the local power company, Hart EMC, to allow for my excess solar power to be sent back into the grid. And, after a few trips to Hartwell, including bringing in a truck that drives metal support beams into the ground, the system went live on May 2.

What kind of solar solution did we build?

The solar solution is straightforward and consists of three major parts:

30 SunPower X21 335 watt panels. These gorgeous dark blue panels turn sunlight directly into electricity. Sunpower is the Ferrari of solar panels. They cost a bit more but they put out more power per square foot and will last longer than almost any other product.

Solar Edge StorEdge 7.6 inverter. This is the component that converts the direct current (DC) electricity generated by solar panels into alternating current (AC) electricity used by houses and the grid. It sits on the wall in the garage and connects to the panels in the field by an underground conduit.

Like most residential inverters, the StorEdge has a super cool website and app that gives you minute by minute information on how much power your panels are generating.

Curb Energy Monitoring. Most solar solutions will only show you the big numbers – how much power comes from the grid and how much from your panels. If you really want to understand how your house uses electricity, particularly if you want to go off-grid, you need a specialized energy monitoring system. A few months after the solar setup was up and running, I installed a cool hardware and software solution made by Curb Energy out of Austin, Texas. The minute-to-minute updates on power consumption in my house were incredibly interesting and a little eye-opening (that huge yellow spike occurs every time I charge my car). 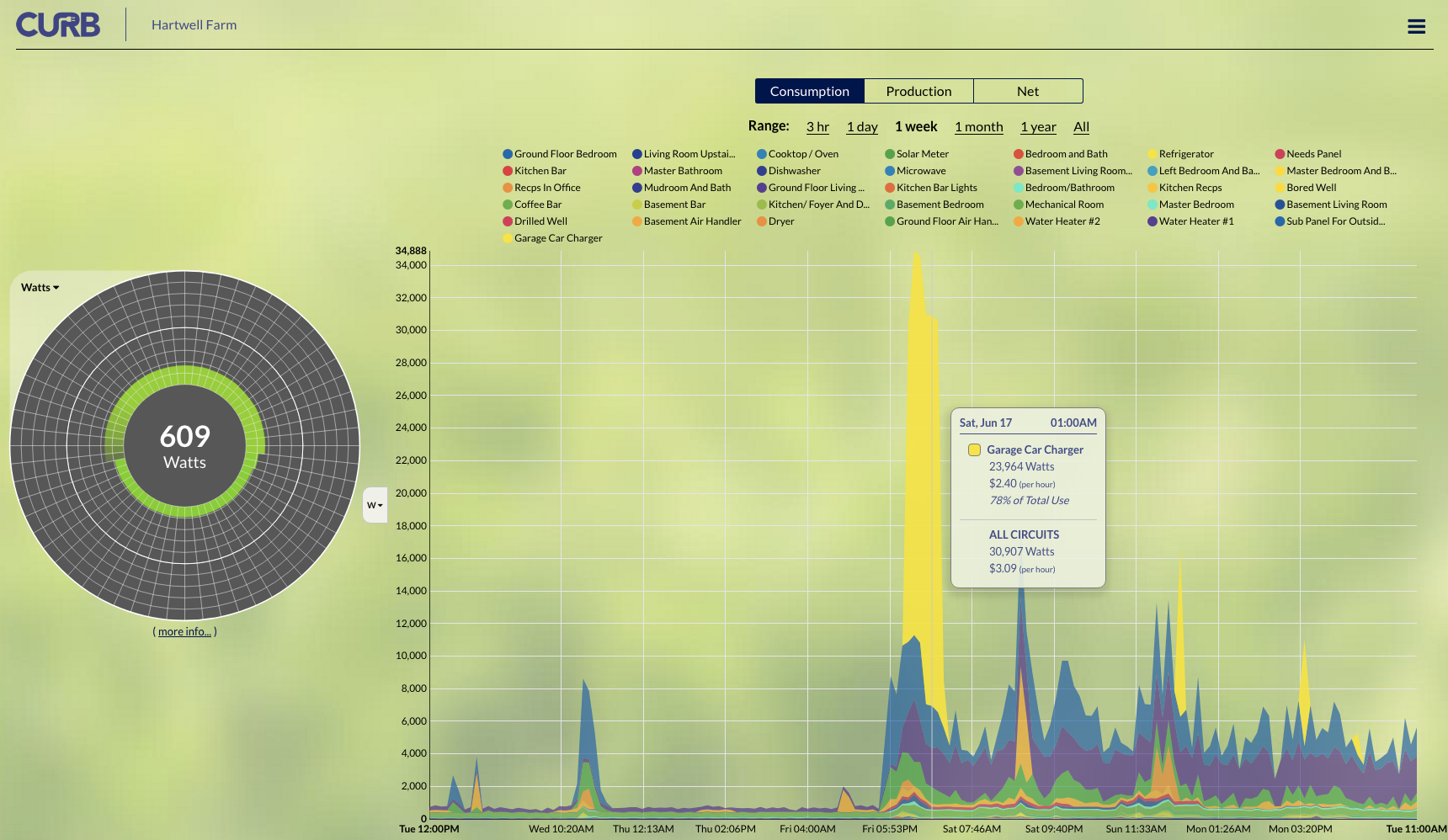 How do solar panels, houses, and the grid work together?

Most residential solar installations are pretty simple. Solar panels sit on the roof or in a field generating electricity when the sun shines. That electricity compliments the electricity coming in from the grid to power the HVAC, the lights, the microwave and nearly everything else in your house. But, as the sun rises and sets, as clouds pass over, and your appliances turn on and off, the direction of the power changes throughout the day:

As an aside, this third scenario is one of the biggest debates in the industry: How should utilities handle the excess electricity from solar panels? The policy varies from state to state and even varies across utilities within a state.

So, what did we learn over the last year?

Overall, the process of adding solar to our home was straightforward. There were only a few things that surprised us.

There was only one other surprise: the whole system is surprisingly anti-climactic. It doesn’t make any noise. It doesn’t have a fancy interface. It doesn’t even have any blinking lights. It just sits there. You build it once and it will run for decades with almost no maintenance.

Almost every other form of electricity generation is complex, huge, noisy and often dirty – certainly nothing I could install in the quiet field outside my house. Traditional power plants require constant maintenance and teams of experts 24/7. When you stop and think about it, the anti-climactic personality of solar is really its superpower.  It’s not hard to see a future world where nearly all of our energy is generated the same way we grow grass – just sitting back and enjoying the sun shining down on us.

For the moment, my solar setup in Hartwell is pretty simple. But tune in for more updates as the design process restarts, batteries get added and the house begins its journey to go off-grid.