Hawaii is a postcard from our electric future (Part 2)

Island power grids are a microcosm of the vastly larger grids that criss-cross the planet. In Part 1 of this series, we looked at how small islands are pioneering the path to clean energy. They are disproving conventional wisdom by showing that intermittent power from the sun and wind can successfully provide affordable and reliable electric service.

Clean energy grids may work for small islands, but can their success scale to mainland-sized communities? Can clean energy provide affordable, reliable power for the homes, offices and industries for a million people? The leaders of Hawaii believe so. In fact, the state is already leading the country in clean energy and they have ambitious plans to achieve a 100% clean energy grid by 2045.

Hawaii is a postcard from our electric future

Jeff Mikulina is the Executive Director of Hawaii’s Blue Planet Foundation. Much of his career has been spent helping shape the policies that have made Hawaii the leader in clean energy. Jeff described the state’s unique position when he told me, Hawaii is like a “postcard from our [electric] future.”

In the coming years, the world’s electric grids will face daunting challenges. As power industry leaders contemplate how to solve them, they can look to Hawaii. Because, when it comes to the the grid’s future, Hawaii is already there.

Electricity is so expensive, it’s cheaper to make it yourself

Hawaii has the highest electricity prices in the U.S. Over the years, it has been as much as triple the average price of the rest of the country. These high costs result from the state having no native fossil fuel resources. Like most islands, Hawaii’s grid has historically powered almost entirely on oil shipped in from the mainland.

When the price of grid electricity is so much higher than the price of solar panels, it becomes the perfect incentive for homeowners to become local energy pioneers. About a decade ago, that’s just what Hawaiians started doing. Even though solar was far more expensive back then, the price of electricity from the grid was even higher. The adoption rate of residential solar took off. The state made it even more attractive by crediting back excess solar power against the homeowners’ bills. By 2017, one in every three single family homes in Hawaii had rooftop solar, making the state America’s local energy leader.

Too much solar power

Yes, it’s possible to have too much solar. Just ask California. During a handful of long, sunny days in 2017, solar panels across the state were actually generating more power than the entire state was consuming. This turns out to be a very serious problem. In one of the big ironies of clean energy and traditional grid design, excess power risks tripping grid circuit breakers and creating cascading blackouts. Twentieth century grid technology isn’t smart enough to tell the solar panels to disconnect and it will take years for batteries to reach the scale and price points to temporarily store the excess power. Fortunately, at least in 2017, nearby Arizona was able to off-take the excess power so California electricity customers were spared blackouts.

In 2014, Hawaii had the highest solar power per capita in the U.S. but there are no nearby states to absorb the excess power. As the threat of grid overloads grew larger, Hawaiian leaders faced an impossible decision. In 2015, they put the brakes on the state’s wildly popular residential rooftop solar program. No additional solar could be connected to the grid, period.

Needless to say, this was not well received. So the state got creative by shifting their perspective from “residential solar is overloading the grid” to “residential solar can help fix the overloading.” Hawaii applied a clever twist to electricity pioneer Samuel Insull’s business model innovation, “time of use rates.”  Rather than paying homeowners the same price for their excess solar electricity throughout the day, the Hawaiian utilities paid a premium for homeowners to sell their excess solar power at night. In other words, this new program, called “Smart Export”, made it financially attractive for homeowners to install residential storage batteries and become their own microgrids. The batteries allowed excess solar power to be stored during the day and sold to the utilities at a premium during the night.

With one simple program, the state of Hawaii simultaneously solved three major problems. First, they created a roadmap for fixing an overloaded grid without the capital expense of utility-scale battery storage. Second, they created a powerful incentive for homeowners to be more self-sufficient by using even more of their own solar power. And, third, they laid a foundation to create the country’s first grid of microgrids – the most effective strategy for islands to reduce the impact of devastating storms.

Grid Defection – the real challenge of people generating their own electricity

Hawaii learned a valuable lesson from the huge adoption of rooftop solar – even modest incentives can become wildly popular in a state that loves clean energy. The state leaders realized that Smart Export might prove equally popular and result in huge adoption of residential battery storage. While homeowners using even more of their own solar power is positive, it could also have the unintended consequence of dramatically reducing the electricity purchased from utilities. In fact, batteries could allow homeowners to become so self-sufficient that they quit buying power from the utilities. Industry think tank, Rocky Mountain Institute aptly calls this “Grid Defection” and it represents an existential threat to Hawaii’s utilities and, frankly, to the entire power industry.

The suprising challenge of Grid Defection isn’t that people disconnect from the grid, it’s that most Grid Defectors will still require some level of connection to the grid. Let me explain. While it’s true that residential solar and batteries are now cost competitive with Hawaii’s electric rates, these systems can only store electricity a day at a time. What if it rains for week? The batteries become depleted in a day or two and there is not enough sun to recharge them. Even as battery prices drop, most homeowners would struggle to justify buying 3-4 times more batteries just to get through a few rainy weeks a year. In another irony of the traditional grid and clean energy, most Grid Defectors will still require a grid.

Partial Grid Defection creates a huge problem for utilities. They still need to maintain the powerlines. They need to keep powerplant capacity on standby for those rainy weeks. All this costs money. Hawaii’s answer to partial Grid Defection was to create a second ground breaking program called Customer Grid Supply-plus (CGS+). Quite simply, if a homeowner wants to stay connected to the grid but only buy electricity infrequently, the utilities will charge $25 per month to help cover the costs of maintaining the grid. The industry calls this “grid as backup.”

Peak utility – A century of growth turns into a slow decline

For nearly a century, the power industry has been an investor’s dream – decades of predictable, profitable  growth. Government granted monopolies have all but assured shareholders of growing profits. Banks could confidently make loans for enormous power plants knowing that expanding customer demand would eventually utilize any excess capacity.

But, what would happen if this perpetual growth machine were to stop? Or even worse, what if electricity sales actually begin to shrink? This is what I call Peak Utility. This once unthinkable future looks increasingly likely for utilities across the world. Thanks to advances in energy efficiency and the increasing adoption of rooftop solar, utilities are facing the very real possibility of financial stagnation and decline. Shrinking revenues raise terrifying questions, especially for an industry with substantial fixed costs. Can the utilities continue to pay down their loans? Can they afford to maintain their equipment and keep it safe? How will the lights stay on if they go bankrupt? 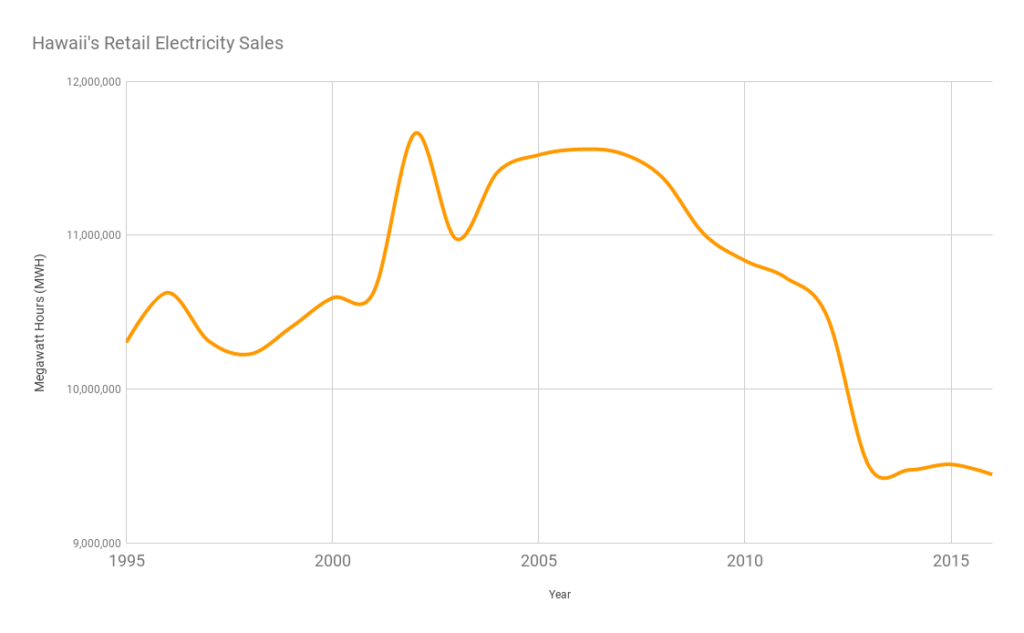 Like most issues in energy, Hawaii is already out in front. The state hit Peak Utility a decade ago. Electricity sales across the islands hit their highest point in 2007 and have been slowly declining since. Hawaii’s solution to Peak Utility is something the industry calls “decoupling.” For most businesses, increasing revenues lead to increasing profits. Hawaii’s regulators decoupled the utilities’ profits from their revenue. They allowed the utilities to raise rates (in some cases) to compensate for decreases in demand. Hawaii’s decoupling is controversial and by no means, a perfect fix. The hope is that decoupling allows the state’s utilities to remain sufficiently healthy to continue attracting capital and continuing to offer affordable, reliable electricity to everyone.

Hawaiians love saving money on electricity. They should, since electricity from the grid is far more expensive than the costs of rooftop solar. But as solar continues getting cheaper and cheaper, it will reach “grid parity” for residential electricity customers in virtually every other part of the U.S. and the world. In fact, depending on how you measure it, residential solar is already the least expensive way to generate power across most of the U.S.

The shift to clean, local energy won’t be easy and it won’t be perfect and there are many cautionary tales yet to be told. As Hawaii explores this uncharted territory, the rest of the world will be watching closely. 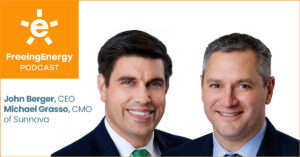