The Green New Deal – climate salvation or too blue to be true?

What is the Green New Deal?

Washington, DC has rediscovered the climate. The Democrat’s rising young star, Congresswoman Alexandria Ocasio-Cortez (D-NY) has thrust the Green New Deal into the public spotlight. The party’s leaders, including several 2020 presidential hopefuls, are breathlessly endorsing it. Is it possible that climate change will once again become a political priority for one of the country’s two parties?

NPR published a copy of the 14 page, 762 word Green New Deal (GND). At first blush, this looks like the kind of manifesto that climate supporters have been waiting over a decade to see back on Capitol Hill. Like an all-you-can-eat buffet, there’s a little bit of everything in here so everyone on the left is going to find something they love.

The GND calls for Federal action on all the big sources of greenhouse gas emissions including transportation, buildings, agriculture, efficiency, and manufacturing. It has a few sentences for the clean energy crowd but not as much as advocates had envisioned. Sections (2)(C) and (D) read:

(2)(C) meeting 100 percent of the power demand in the United States through clean, renewable, and zero-emission energy sources, including (i) by dramatically expanding and upgrading renewable power sources; and(ii) by deploying new capacity;

The best way to explain this is word counts. Out of the 762 total words “climate” is mentioned 15 times, “pollution” 8 times, and “greenhouse gas” 4 times. Clean energy makes a brief showing with “electricity” and “electrification” each being used once. “Power” is mentioned four times, although once in the context of “bargaining power of workers.” Missing from the GND are words like “market(s)” and “innovation”, not to mention the  absence of political lightning rods like “fossil fuels”, “hydrocarbons”, and “oil.”

But, wait, there’s a lot more 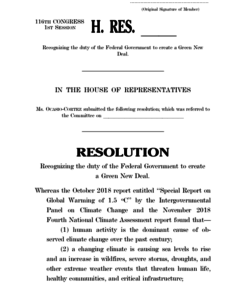 Once you get past section 2, the GND transitions from a green manifesto to one that is decidedly blue – by that I mean, Democrat blue. The last four pages of the GND speak to equality, social justice, jobs, and healthcare. Again, word count tells the story with “jobs” being used 4 times, “unions” 3 times and “indigenous people“ 7 times (to be fair, these 7 mentions all took place in a single paragraph). Some examples:

(4)(H) guaranteeing a job with a family-sustaining wage, adequate family and medical leave, paid vacations, and retirement security to all people of the United States; (I) strengthening and protecting the right of all workers to organize, unionize, and collectively bargain free of coercion, intimidation, and harassment;

(4)(O) providing all people of the United States with (i) high-quality health care; (ii) affordable, safe, and adequate housing;

It’s fair to say the Green New Deal is a top-down, policy-first strategy that doesn’t seem to favor markets and technology innovation as critical paths to reducing greenhouse gas emissions.

Let me start by saying I am no political expert. I’m just a guy trying to get the world to clean energy as quickly as possible. That all being said, it seems to me that Representative Ocasio-Cortez and the GND co-sponsor, Senator Ed Markey (D-MA) have just delivered a Valentines Day gift for anyone opposed to climate action, which includes the majority of Republicans in Congress.

Conservative Wall Street Journal writer, Kimberely Strassel tweeted, “If a bunch of GOPers plotted to forge a fake Democratic bill showing how bonkers the party is, they could not have done a better job.”

1) By the end of the Green New Deal resolution (and accompanying fact sheet) I was laughing so hard I nearly cried. If a bunch of GOPers plotted to forge a fake Democratic bill showing how bonkers the party is, they could not have done a better job. It is beautiful. #GreenNewDeal

Even the Democrat’s own Joe Manchin, the Senator from West Virginia coal country, said, “it’s a dream, not a deal.”

Here’s the problem. My moderate Republican friends have told me for years that their biggest concerns about climate action are that it invites an all-you-can-eat buffet of government regulations and spending programs. But they have been losing ground. According to a national survey from Pew Research, two-thirds of Americans think the federal government is doing too little to address climate change. The same survey says more than three-quarters of Republicans think the country needs more solar and wind farms. In the face of such broad public support for climate action and clean energy, it was getting harder and harder for Republican leadership to continue ignoring climate and energy policy. That is, until the Green New Deal.

By linking climate action, which enjoys wide support, with aggressive social programs, which are supported mostly by left-of-moderate Democrats, Republicans can credibly dismiss both at the same time. According to the Economist…

The proposal appears to confirm one of the main Republican arguments for inaction on global warming: a contention that Democrats are using the issue as a smokescreen for a left-wing economic agenda.

You can almost hear the Republican campfire stories about the GND… “Listen closely boys and girls, as I tell you the story of the blue boogeyman. He deceives you with stories of floods and heat waves. But, all he really wants to do is take your hard earned money and give it to people who don’t want to work. If you don’t believe me, just read the new blue manifesto, called the Green New Deal.”

At the risk of making this article too long, I remember back to a different time when it was the Republicans who led the rallying cry for climate action and clean energy. The elder President George H.W. Bush put modern wind subsidies in place in 1992 (called the PTC). His son, George W. Bush, signed the solar tax subsidies (called the ITC) into law in 2005 and kept extending them till the end of his presidency. Even the EPA was put in place by a Republic president. Richard Nixon broke new ground on environmental issues in his 1970 State of the Union speech and created the EPA a few months later. In fact, it was only a decade ago that the Republic party platform recognized climate change and endorsed market-based actions to address it. This is directly from their platform in 2008:

The same human economic activity that has brought freedom and opportunity to billions has also increased the amount of carbon in the atmosphere. While the scope and long-term consequences of this are the subject of ongoing scientific research, common sense dictates that the United States should take measured and reasonable steps today to reduce any impact on the environment. Those steps, if consistent with our global competitiveness will also be good for our national security, our energy independence, and our economy. Any policies should be global in nature, based on sound science and technology, and should not harm the economy.

The Solution: Technology and the Market

As part of a global climate change strategy, Republicans support technology-driven, market-based solutions that will decrease emissions, reduce excess greenhouse gases in the atmosphere, increase energy efficiency, mitigate the impact of climate change where it occurs, and maximize any ancillary benefits climate change might offer for the economy.

Don’t believe me? Check it out for yourself or read about it in my previous article, Myth busting the crazy politics of clean energy: Do Republicans really hate clean energy?

The bizarre world of politics has weaponized one of the most universal and important questions of our time: how do we ensure the planet is livable for our children and grandchildren? On a scale of one to ten, the Green New Deal comes in at 8 or 9 – don’t worry about how we’ll pay for it and use every tool of government authority to slow climate change in the next decade (oh, and throw in universal healthcare and guaranteed employment). The current Republican approach is more like 1 or 2 – deny that greenhouse gases are a threat, actively subsidize the fossil fuel powered grid, eliminate Federal subsidies for wind and solar in 2021, and wind down support for electric vehicles.

George Shultz, the former Republican Secretary of State under President Ronald Reagan famously said of climate action, “You take out fire insurance on your house. That’s not because you expect your house to burn down. But, in case it does, you’ve taken out a policy.”

My plea to politicians on both sides of the aisle is this: quit letting the most zealous members of your respective parties lead the discussions on clean energy. Start by finding a middle spot on the dial and then we’ll go from there. Let’s buy some insurance.