Every month, we sift through hundreds of news items and research reports about clean, renewable energy to bring the best ones directly to you.

After months of debate, Ohio nuclear bailout bill becomes law. In a close vote, the Ohio legislature passed a long-contested bill to help save the Davis-Besse and Perry nuclear plants by giving their parent company $150 million a year, paid for by the state’s electricity customers. The decision will hinder the state’s move towards renewable energy, and several parties aren’t happy. (The Columbus Dispatch) 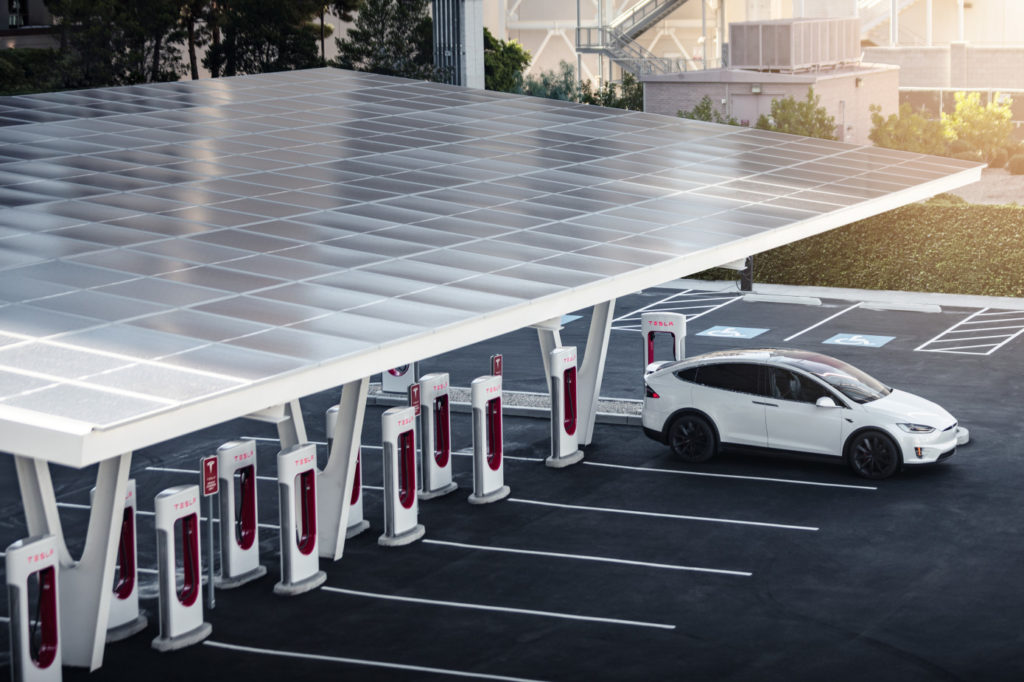 Europe set to race past US in battery manufacturing. Europe’s lithium-ion battery manufacturing capacity is expected to see tenfold growth in the next four years, surging from 18 gigawatt-hours per year today to 198 gigawatt-hours per year in 2023. Though this growth is largely due to investment from Chinese manufacturers, Europe is beginning to seek a means to break away from dependence on Asia. (GreenTech Media)

Energy transition prompts more insurers to back away from coal. The transition to clean energy has increased the risk for insurance companies that provide coverage to utilities and mining companies involved in the coal industry. Insurers are slowly beginning to distance themselves from coal by raising premiums and cutting ties with companies whose dependence on coal falls above a particular threshold, creating yet another economic advantage for clean energy. (Axios) 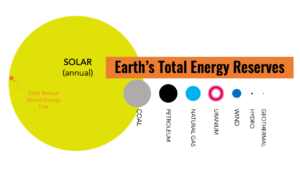 The Earth gets more solar energy in one hour than the entire world uses in a year.
There is so much solar energy hitting the earth’s surface that even a single year of sunshine exceeds all known energy reserves of oil, coal, natural gas and uranium put together. (read more) 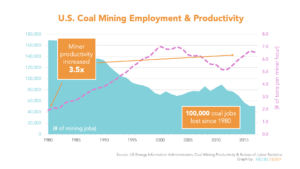 100,000 coal jobs have disappeared since 1980. Where did they go?
You can ask 100 ‘experts’ why coal jobs are running dry, and you’ll get 100 different answers. But the hard truth behind coal’s decline is much simpler than it’s often made out to be. (read more) 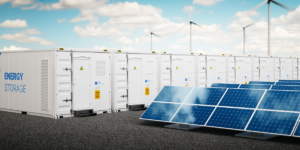 How batteries will create the clean energy future much faster than you think.
Batteries could prove to be the key piece of the clean energy puzzle, unlocking the true power of renewables and allowing the world to produce consistent, reliable power with no carbon footprint. (read more)

Podcast #017– Anya Schoolman and Solar United Neighbors: Can we change the future of energy at the community level? 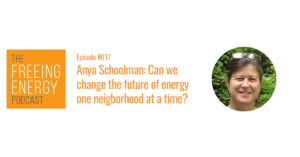 Freeing Energy Podcast Host Sam Easterby talks with Anya Schoolman, the founder and Executive Director of Solar United Neighbors. Listen and learn about SUN programs centered on energy rights, how those rights can be leveraged to save money, support clean energy, and fundamentally change our energy system at the community level. 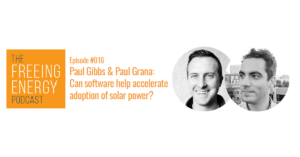 Designing and engineering a solar power system for a home or business has a lot of complex, interchangeable elements …elements that can dramatically improve the safety and financial returns of a system. Host Bill Nussey visits the headquarters of Folsom Labs in San Francisco to talk with founders Paul Gibbs and Paul Grana about the rapidly evolving solar marketplace. The founders share their experience on building a company and helping thousands of solar installers keep pace with demand and improve project design, engineering and overall customer experience for residential and commercial solar power systems.

Podcast #015 – Marc Perez: Can we capture more sunshine and save big on energy storage? 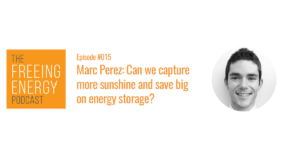 A team of grid experts has another approach that is so simple, it might just be the fastest path to clean energy. Host Bill Nussey talks with Marc Perez of Clean Power Research about their groundbreaking research for the State of Minnesota. That study reveals how optimizing solar capacity and battery storage can help solve seasonal energy demand, save on energy storage costs and still be cost competitive with fossil fuel-based generation sources.