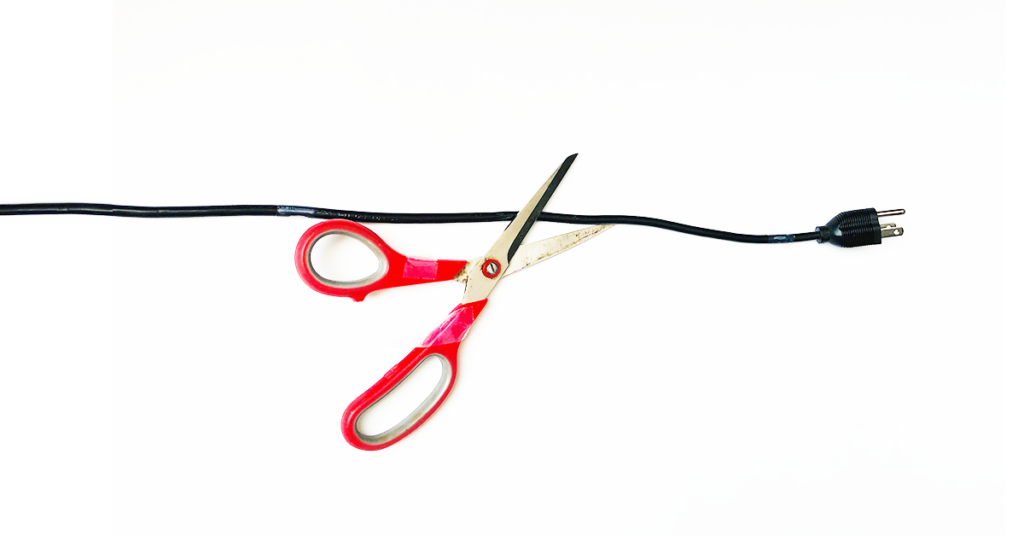 Disconnecting from the grid is an appealing notion for many people. You can embrace rugged independence, keep the lights on during storms, and maybe even save some money.  So, if this is so great, how come so few people actually cut the cord? It turns out that the grid is pretty complicated and creating your own mini-version isn’t as simple as it seems – especially if you want to use clean energy. But, if you’re determined, you can take your house off-grid and truly independent in four steps.

Step 1 – generate your own power

The old-fashioned way to make your own electricity is using a diesel, propane, or natural gas generator. These are great for backup power but tend to be far more expensive than the grid, are rarely designed for long term usage, and, worst of all, small systems produce proportionately more pollution and greenhouse gases than their grid-scale cousins. So, what about clean energy options for taking your house off-grid? 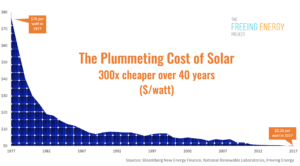 What is the story for solar’s low price? Over the last 40 years, its price has plunged 300x. Most experts expect it to continue declining for years (see Why does the cost of renewable energy continue to get cheaper and cheaper?). Better yet, generating a kilowatt of electricity with rooftop solar is already cheaper than buying it from the grid in most states. This is just the beginning. The National Renewable Energy Laboratory (an agency of the US Department of Energy), predicts rooftop solar will drop to 5.5 cents per kilowatt hour by 2030, compared to the current average retail price of grid power of 12 cents (the US government is notorious for underestimating the rate of solar price declines – the actual prices in 2030 will likely be even lower).

Despite the promise of solar, there’s a catch. Solar panels alone can’t take your house off-grid.

Step 2 – install batteries to use your solar power at night

Rather than exporting your excess solar power to the grid (and hoping your local net metering rates are reasonable), batteries let you store solar power during midday so you can use it at night. Up until recently, batteries have been too expensive for residential use but that is quickly changing.

In states with expensive electricity, like Hawaii and California, self-generated electricity from a solar+battery system is already cheaper than buying power from the grid. Fortunately, like solar, the price of batteries is plunging and is quickly becoming more affordable for everyone. Analyst firm Bloomberg analyzed 7,000 projects and found the price of lithium-ion batteries dropped an astonishing 35% across 2018. The declining costs of solar and batteries mean homeowners across the country will soon be able to begin taking their homes off-grid and build solar+battery systems that lower their electricity costs, reduce pollution and greenhouse gases, and provide long term backup during grid outages.

Storing excess solar on a daily basis is great for the nights that follow long, sunny summer days. But storing energy for use in the wintertime is another matter.

Short winter days get as little as one-third the sunlight of longer summer days. Many experts see this as an insurmountable challenge of clean energy. They say that storing summer solar, so it can be used for months of shorter winter days, will require 50-100 times more battery storage, making off-grid economically infeasible (the same thinking says that seasonal storage makes a nationwide clean energy grid impractically expensive).

Fortunately, there is a much simpler answer — just build more solar. (learn more about how this works from How batteries will create the clean energy future much faster than you think) 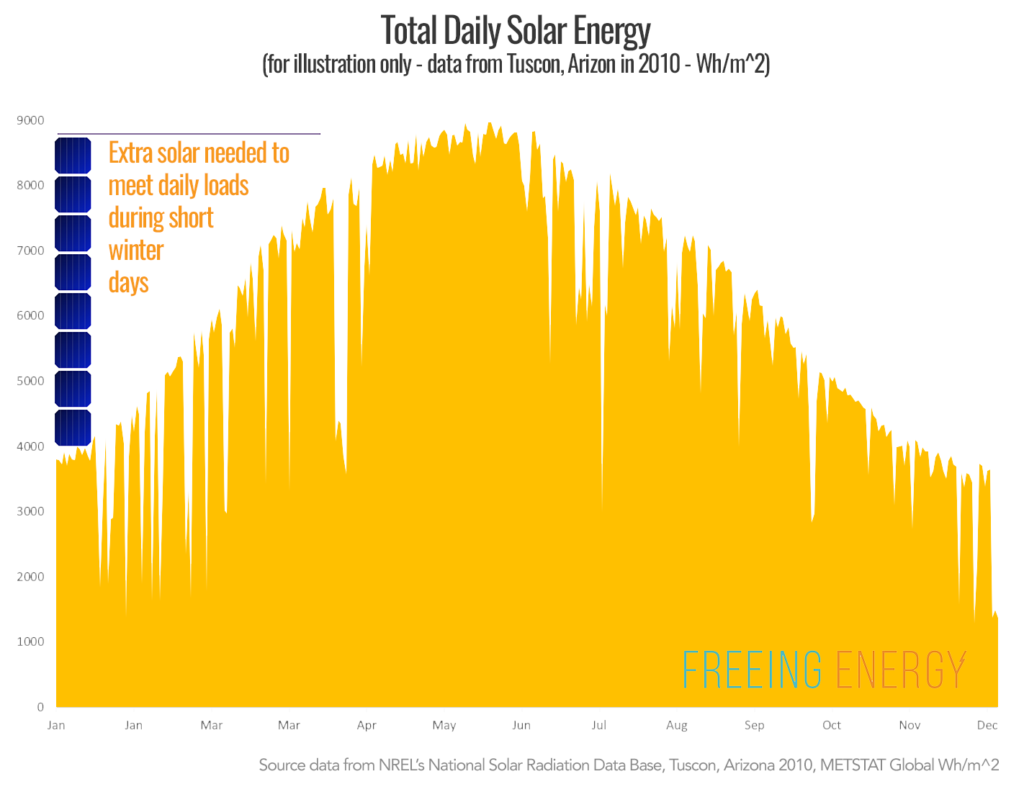 If your region of the country gets half the solar energy in the winter, then install twice as many solar panels. This will obviously raise costs and not all roofs can fit more panels but that can change as panels become both cheaper and more efficient. New technologies like solar shingles and even solar driveways provide ever increasing ways to turn sunshine into electricity. And, shared community solar gardens make it possible to tap even larger, cheaper solar arrays right near your home.

Many experts are concerned that “overbuilding“ solar to work on short winter days means you produce more solar on summer days than your batteries can store. Again, there’s a simpler answer. Just turn off your solar panels when the summer sun fills up your batteries. The industry calls this “curtailing” and it’s viewed as a four-letter-word. But this is old thinking – just look at computers. Once upon a time, people in white lab coats would watch over expensive mainframes 24/7 to ensure every bit of available computing was utilized. Today, computers have so much excess capacity that we run screen savers for the fun of it. Similarly, as the price of solar drops, the industry will realize that throwing away excess solar power costs a small fraction of building seasonal scale batteries.

Now that you have batteries and sufficient solar for short winter days, there is one remaining challenge when taking your house off-grid.

Going off the grid is definitely achievable but it’s going to take some work. You have to be prepared for bad weather. Rainy, cloudy, or snowy days lower solar panel power production to between 10% and 25%. Your batteries will eventually drain so you’ll want to be prepared. 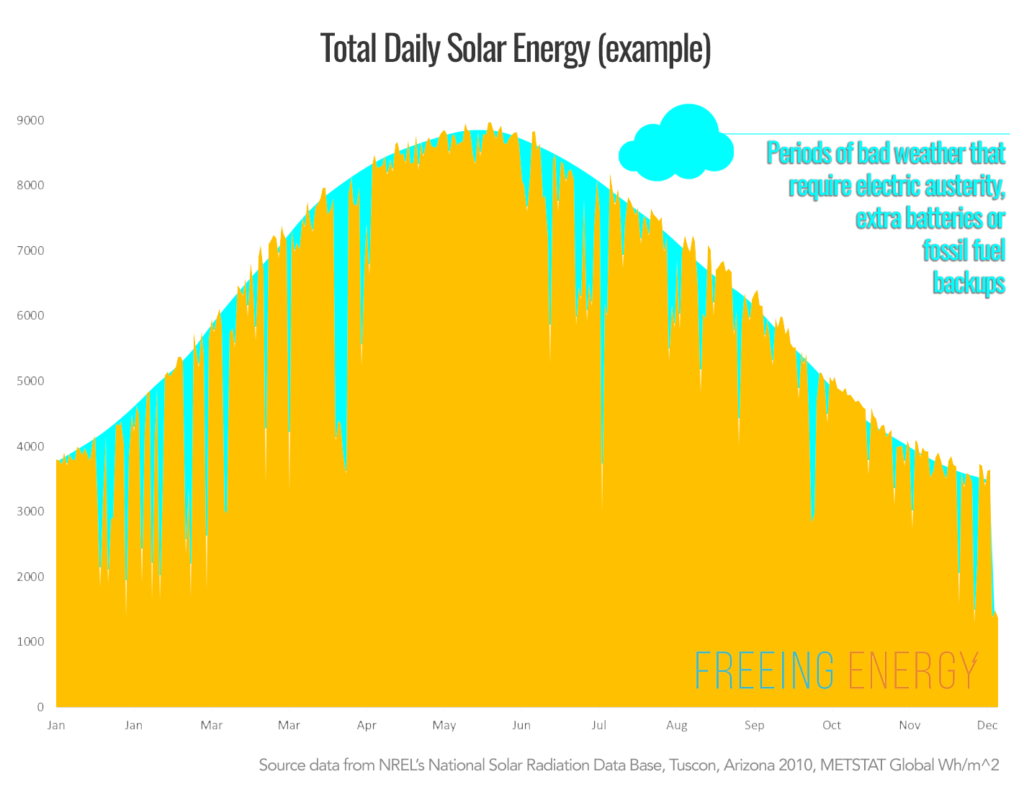 The easiest approach is electric austerity. As the bad weather drags on, you will need to make some lifestyle adjustments like keeping your air conditioning to a minimum and not using your microwave or clothes dryer. But if sacrificing the always-on way of life seems like a tough prospect, there are several other options.

The National Academy of Engineering ranks electrification and the grid as the single greatest engineering achievement of the 20th century. It powers our lights, TVs, elevators, subways, computers, factories, X-ray machines, and every other part of our modern society. Just flip a switch and we get as much power as we want the very instant we want it. Yet, despite its complexity and scale, electricity somehow remains affordable and generally reliable to virtually every single person in the US.

At this moment in history, disconnecting from the grid isn’t easy and it’s not for everyone. But the technology is available and, before long, the costs of taking your house off-grid will be competitive with grid-connected electricity. The “consumerization” of energy and the resulting “grid defection” by millions of homes is setting up one of the great clashes in modern history – the essential business model of the electric monopolies vs. the rights of people to power their homes and businesses however they chose.