Competition is all about price, features, and customer experience. Right? That’s what business schools have been teaching for decades and it’s largely true. But, if you really want to change an industry, you need to change the rules. You need to create new business models.

Let’s look at the ride-sharing business. In just six years, Uber and Lyft grew from an unlikely idea into a $36B industry. By 2017, more people in NYC were riding Uber than taxis. And in San Francisco, ride sharing was already four-times larger than taxis.

At first glance, this is hard to believe. Uber and Lyft own no cars. They have relatively few employees. And they face a rats nest of regulatory resistance designed to protect the existing taxi industry. How did these companies come from nowhere to upend a deeply entrenched business?It’s true that they embraced the new technology of smartphones. And they provided a new level of convenience that taxis didn’t offer. But the ride-sharing industry’s biggest breakthrough was creating a new business model that wove all these pieces together. Rather than owning cars and employing drivers, they created a way to bring together a huge army of self-employed car owners, their cars, and a steady stream of eager customers. Then, they just sat back and charged a small fee for every ride. After more than a billion rides, the industry has been changed forever.

What exactly is a business model

A business model can be as simple as paying someone for something. For example, you could buy an apple for $1.00. But business models are usually more sophisticated. What if you bought an apple tree for $10 instead? Your apples are free after that. But now you have to take care of the tree and you have the risk of the tree dying.

Innovative business models are so common, we don’t think about them. Credit cards are a great example. If you want to eat the apple now but pay for it later, Visa and MasterCard can help. They inserted themselves into the middle of the most common business model and created a $160  billion industry. Then there are social networks like Facebook. These companies offer a service valued by millions of people that is effectively free to use. They shifted the traditional software business model to one driven by advertising. There’s a saying in that industry – if the product is free, then you’re the product. Other examples of innovative business models include car leases, online newspapers, auction websites like eBay, multi-level marketing like Amway… just to name a few.

Thomas Edison’s light bulb promised to change the world. But in 1880, powering the bulbs was so expensive, only the wealthiest could own them. To make electric light affordable to everyone, Edison invented a new business model: centralized power generation. By generating electricity in a large, central power plant and sharing it over a local grid, he achieved economies of scale that made electricity cost-effective for hundreds of customers at once.

Before Edison’s new business model, electric light required households to buy expensive batteries or even build their own miniature coal power plants. Edison’s new business model not only lowered the cost of electricity, it made it far more convenient for people to purchase it. Customers just paid for electricity when they used it. He even commercialized an electric meter to precisely measure and bill for usage.

Electrification is one of the greatest stories in business history. Keep an eye out for my upcoming posts on the Current Wars and the amazing history of Thomas Edison, Nikola Tesla, George Westinghouse, and Sam Insull. 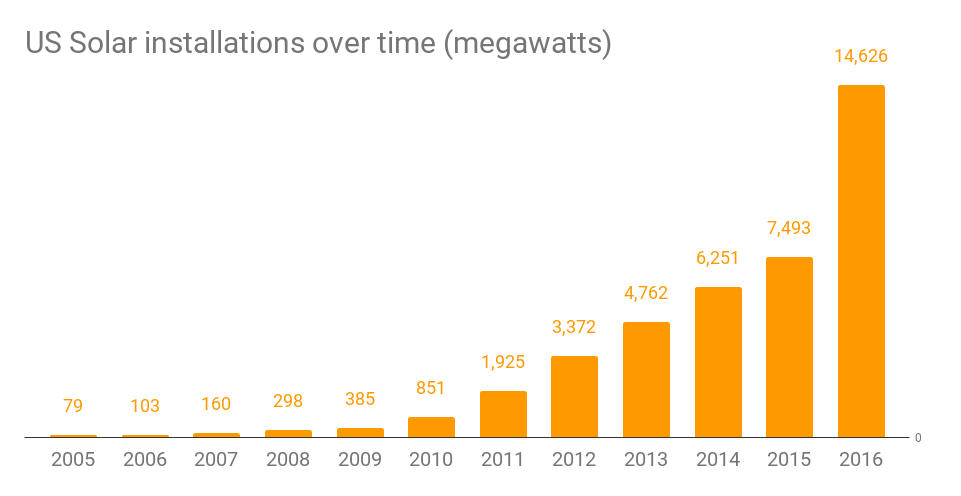 Why did US solar installations experience a growth spurt in 2010 and 2011? There weren’t any new federal incentives those years. The price of solar had already been dropping fairly steadily for more than a decade. While there were numerous reasons for the growth spurt, one of them was the rapid adoption of a new business model called Solar Power Purchase Agreements (solar PPA’s).

In the early years of solar, developing large projects required large upfront capital expenditures and a high degree of technical expertise. Solar PPA’s changed all that. Popularized by pioneering solar company, SunEdison, and it’s CEO, Jigar Shah, Solar PPA’s took all the technical and financial complexity out of solar. They created a simplified, standard approach that let solar buyers avoid upfront capital costs and just pay for the solar power as they used it. In a sense, the business model of Solar PPA’s was very similar to Edison’s first grid in 1882.

SolarCity popularized a similar model with the idea of third-party ownership and helped spur the rapid growth of residential rooftop solar. Montgomery County worked with their partner Schneider Electric to pioneer Microgrid as a Service (Maas) and paved the way for municipalities across the country to build more resilient and cost-effective local energy solutions.

PPA’s, third-party ownership, and MaaS are just the beginning. Arcadia has created a way for people to purchase community solar anywhere in the country. PACE financing dramatically reduces the complexity and repayment challenges for home and building owners to pay for efficiency and clean energy upgrades. The list goes on and on.

Clean energy technology is ready for prime time. Solar and wind are now the cheapest sources of electricity in many situations. The price of battery storage continues to plummet and will soon be a part of the world’s day to day energy mix. And regulations are even catching up. States like New York and California as well as countries like the UK and China are rolling out forward-thinking laws and regulations that remove many of the roadblocks facing clean energy.  And, behind the scenes, with less fanfare and less attention, innovative business models are playing a major role in accelerating the shift to clean energy as well.

If you’re an investor, an entrepreneur or even an executive in the industry today, business models may be one of the most effective ways to rapidly create value in the clean energy transformation.