It was the summer of 2012 and the Mid-Atlantic was being pummeled by one of the worst storms in years. This was the second summer of heavy thunderstorms and squalls to come through Montgomery County, Maryland, in as many years.  The county leaders were scrambling to dispatch police and emergency workers. But with so many of their emergency buildings blacked out, they were hobbled.

This is the backdrop that catalyzed the groundbreaking development of Microgrids-as-a-Service—a project spearheaded by Local Energy champion Eric Coffman, who heads up the county’s Office of Energy & Sustainability.

“We got hit hard. … We basically ended up with a very significant amount of the county out for long periods of time after two major storms just came out of nowhere,” says Eric. He explains that the county’s emergency services are at their most essential during big storms when it’s more critical than ever for governmental buildings to keep their lights on and power flowing. The clear solution for Montgomery County was what the power industry calls “microgrids,” miniature power plants integrated with a building or campus that supply electricity even when the grid is down.

But there was a big challenge. Microgrids required a lot of upfront capital to build. Municipalities like Eric’s have limited access to loans for large capital expenses. The story of how Eric and his team built their microgrids is an inspiration for every municipality and, frankly, for every government and corporation across the world.

Eric’s project started modestly. His first steps were to venture into solar power. Their first project included a wave of about 6 MW of on-site solar panels spread across nearly a dozen facilities. “We put a solar project in each sub-community in Montgomery County, Maryland. We not only just did a big solar field somewhere—we did build one 12-acre field—but we attached to that libraries and recreation centers so that we could use the solar projects as educational tools, and even some nuances on public safety,” says Eric. For instance, they created a training area for firefighters to learn how to manage fires in solar-powered buildings.

Solar was a great start. While it didn’t solve the power outage problem, it helped the county achieve some of its important climate goals. “When we started down this road, we would have had a hard time jumping from zero to the microgrid. Solar was sort of like our bridge technology,” says Eric. More importantly, he says, these solar projects acted as the muse for the legal, contractual and financial aspects of what would become the nation’s first Microgrid-as-a-Service (MaaS). 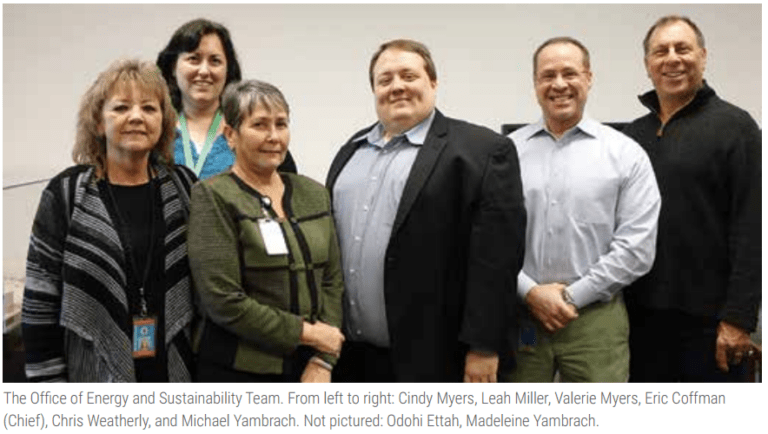 To build his microgrids, Eric needed a larger, more broadly experienced team. And to hire a team, he had to find the budget. As he explained, the best way to get budget in a municipality is to lower the cost of something that is already budgeted. It turns out that his solar panels did just that – they lowered the county’s electric bill so much that Eric was able to build his team with the savings.

Microgrids weren’t new for Eric, who had been co-authoring conceptual papers on the subject since 2003 with his mentor, William Steigelmann, who is a Senior Engineering Consultant with Lockheed Martin and deeply experienced in distributed energy. The papers included analytical modeling of how microgrids can solve problems surrounding efficiency and reliability; in other words, the kinds of issues Montgomery County was trying to solve a decade later. These papers served as a playbook of sorts that illuminated a potential path forward for the county.

With a team built and technical roadmap in hand, Eric was ready to take on the biggest challenges of all: moving a cutting-edge infrastructure project through government red tape and finding the money to pay for it.

Eric’s solution was simple. “We said, okay, let’s challenge the private sector to bring us a solution, and make that challenge based on performance criteria as opposed to us saying we want this product, this product, and this product.” Eric and his team issued a Request for Energy Proposals (RFEP), which allowed 14 interested parties to enter into the bid pool, which was then locked after the RFEP window closed. This limited the bid pool and simplified the proposal process that followed.

Perhaps most significantly was Eric’s approach to ask bidders to provide innovative solutions based on the county’s goals rather than a predetermined set of project specifications. And the clincher: the county’s need for a first-of-its-kind financial framework to make the project possible.

“We had a very specific way we needed to do this financially. The industry struggled with that. It took a little over a year,” recalls Eric. But, in the end, the approach worked.

Schneider brought on Duke Energy Renewables as its financing partner, which means Montgomery County would lease the microgrid from Duke. Schneider’s press release breaks down the roles nicely:

No upfront costs? Check. Efficiency, reliability and clean energy? Check. Ability to supply power when the grid is down? Check.

A multifaceted financing agreement that covered every distinct component of these microgrids? Not so much. Enter the need for an unprecedented new business model.

The power industry uses a standard contract called a power purchase agreement (PPA). This approach works well for projects with a single kind of power generation because it encapsulates a well-understood set of risks and returns. Montgomery County’s new microgrids weren’t that simple. They included not only solar power but also battery storage and combined-heat-and-power generation, each of which varies widely in terms of risk- and cost-analysis. Thus, a straightforward PPA wasn’t going to cut it.

“A microgrid-as-a-service is essentially an amped-up Power Purchase Agreement,” explains Eric. Rather than creating three separate agreements that address each component of the microgrids, Montgomery County’s Office of Energy and Sustainability collaborated with Schneider Electric and the county attorney to create an overarching contract that could encompass subcontracts (or schedules) for each component.

“We ended up with a master agreement with Schneider Electric that allowed us to add more projects, too. And that master agreement is actually also bridgeable or rideable by other local governments,” says Eric. “If Los Angeles or Fairfax wanted to do this, they could literally take the county’s contract and make it their own.”

The most amazing and inspiring part about this project is that, after all this technical, legal, and financial innovation, the new microgrids cost about as much as Montgomery County already pays its utility, which is around 12-13 cents per KWh. In other words, the county can replace its dependency on traditional grid power with power from its shiny new, super-reliable, administratively trailblazing microgrids, all without breaking the budget.

This is a huge step in making these advanced microgrid projects even more attainable. In previous Freeing Energy posts, I broke down the inevitable affordability, business opportunity, and global impact of Local Energy. What Eric and his team at Montgomery County have done is further bring microgrid development within reach by revolutionizing the procurement and legal legwork in a way that sets other municipalities up for a much simpler implementation process.

“It really comes down to making people aware there are ways to do this that don’t impact their other needs, that allows them to reallocate funds, and do it in a way that … they don’t need to put a huge amount of general obligation or cash in a project,” says Eric.

This Local Energy champion has created a major proof point for the industry: What may seem like a costly, space-age concept that only makes sense when trying to solve some intangible goal is in fact an economically sound and attainable way to provide resiliency for a community’s most critical facilities—something Montgomery County was able to do at nearly the same price it was already paying for electricity.

If you work for a local government, corporation, or school campus, I encourage you to ask yourself this:

Is cleaner, more reliable energy important to me?

If so, what am I waiting for?

Cost-competitive Local Energy solutions are not only possible, they are also being proven every day by visionaries like Eric Coffman. In fact, Eric may have an entire roadmap ready to share with you. Just ask him.