Can next-generation nuclear plants save the nuclear industry? (Part 6)

Nearly all modern nuclear power plants are based on a 50-year-old design called Light Water Reactors (LWR). While this type of power plant has seen big improvements in cost and safety over the years, the basic physics are largely unchanged. It is extremely unlikely that the large-scale LWR plant designs will ever be able to rise above the high costs and safety concerns that have relegated them to the stagnant role they play in today’s grid. For nuclear power to achieve its promise as a source of global-scale, rock-steady, emissions-free power, new approaches are needed. To understand whether nuclear power can rise again, I took a look at the emerging nuclear solutions being researched in labs around the world.

All modern nuclear reactors rely on the physics of fission. This approach splits heavy atoms, like uranium or plutonium, and releases massive amounts of energy which is used to create steam and drive turbine generators. But there is another more tantalizing type of nuclear reaction called fusion. It works by combining or fusing lighter atoms, like hydrogen, into a single larger atom. Tens of billions of dollars and decades of research have been invested in fusion reactors because they require only water as fuel, they emit far less radiation, and they create far more energy.

Fusion scientists have been working since the 1940’s to achieve a single goal – creating more energy than is required to initiate the fusion reaction. The very factors that allow fusion to release so much energy also make it hard to tame. So, unfortunately, the goal of net energy positive remains elusive to this day.

One of the largest fusion research projects in the world is called ITER, or International Thermonuclear Experimental Reactor. This effort is a truly multinational collaboration funded by six countries and the European Union. I interviewed one of the lead scientists working on it. He was optimistic that they would be successful in creating net positive energy. But he also conceded that practical power plants were still decades away and, even then, there was no guarantee they would be cost competitive with modern-day alternatives.

The promise of fusion is so enormous that it has attracted several privately funded research efforts as well. I spent part of a day with one of the most well-known groups, General Fusion, out of Vancouver. Their approach is to use mechanical systems to compress and fuse the atoms. It’s unconventional but holds unique promise. Perhaps the most well-known independent fusion research effort is by company TAE, formally called Tri-Alpha Energy. With more than $500 million in private and government funding, TAE is bypassing the mainstream use of heavy water (deuterium and tritium) to try and crack the code using boron and ultra-high temperatures. TAE has made some impressive headway but the net energy gain remains elusive for them as well.

SMRs promise to do what small natural gas turbines have done to coal plants – shift from economies of scale to economies of volume. Economies of scale mean that traditional large scale nuclear power plants have peaked in size and making them larger no longer lowers their cost. Economies of volume mean that the only way to lower cost is to make a much larger number of much smaller things and that’s exactly what SMRs offer. SMR nuclear reactors can be more easily manufactured, financed, and deployed than their giant brethren.

NuScale is one of the most well known SMR vendors. Having raised more than $700 million in government and private financing, the company has recently achieved a significant milestone – the US Nuclear Regulatory Commission (NRC) has officially approved NuScale’s unique reactor design as being safe enough to test. The company already has pilot customers teed up. If all permitting and further regulatory approvals go as planned, the first plants could be online as soon as 2027.

You may find it surprising to learn that nuclear power plants only burn a tiny portion of their fuel. In fact, as much as 96% of the original fuel remains intact when the spent fuel is removed as waste. Countries like Russia and France have built reprocessing facilities to capitalize on this. While the cost benefits of reprocessing vary, the total volume of waste is reduced by 80%, requiring less waste handling and disposal facilities. The US has largely avoided this because the reprocessed fuel is in the form of plutonium (not uranium) which is a higher risk if it falls into the hands of terrorists or rogue governments.

One of my favorite next-generation nuclear technologies is a privately funded company called Terrapower. Bill Gates is one of the investors and I had the privilege of seeing a TED talk he gave on it back in 2010. Terrapower is a so-called traveling wave nuclear reactor because it consumes the nuclear fuel as it moves through a fixed cylindrical fuel supply. It can use the waste products from most LWR reactors and, in his TED talk, Bill Gates says that the world’s existing spent fuel is more than enough to power the planet for centuries.

A new solution like Terrapower has two huge challenges. First, any new nuclear reactor needs to be studied extensively to ensure that it is as safe in reality as it is on paper. Second, governments tend to be very risk-averse and it can take a decade or more for them to approve testing and prototypes. Even though Terrapower has received multiple license approvals, there is still so many license hurtles remaining they are likely to build their first reactor in China rather than the US.

Nuclear R&D operates on an entirely different time scale than most industries. Research, engineering, and prototypes take decades for even incremental progress. Because each serious effort requires billions in funding, only a handful of approaches can be tested and vetted. As nuclear plods along, R&D in natural gas, carbon capture, solar, wind, and batteries continues to move forward more rapidly. This raises a simple but critically important question. Even if these emerging nuclear technologies can achieve their ambitions, will they still be needed when they are ready a decade or two from now? Or will other types of electricity generation leapfrog nuclear to meet the world’s growing need for cheaper, less carbon-intensive energy?

Given the size of the nuclear industry and the tens of billions that have been invested in its future, it’s not surprising that there is a huge amount of research examining this very question. Organizations like the ThirdWay and The Breakthrough have made strong cases for the benefits and the outright need for a nuclear-powered future. But it was a recent report by a team of nuclear power advocates from Carnegie Mellon University that really caught my attention. Their paper, “US nuclear power: The vanishing low-carbon wedge”, which was widely featured in the trade media, painted a very bleak future for emerging nuclear technologies and US nuclear power in general.

“It should be a source of profound concern for all who care about climate change that, for entirely predictable and resolvable reasons, the United States appears set to virtually lose nuclear power, and thus a wedge of reliable and low-carbon energy, over the next few decades.”

The paper’s authors analysis confirmed what experts were telling me directly – emerging nuclear technologies are likely to take too long and be too expensive to reignite the US nuclear industry. 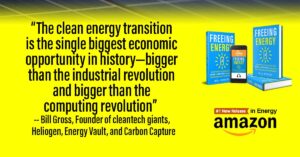 FOR STARTUPS: Freeing Energy is the on-ramp for clean energy entrepreneurs and innovators