How much CO2 and pollution comes from burning coal?

(you can see a newer version of this article here: The environmental impact of coal: CO2, pollution, land, and water.)

It’s hard to visualize millions of tons of anything so let’s reduce the question to something simple and personal. How much CO2 and various types of pollution would be released from a coal plant if we powered a 100-watt lightbulb for a year? Let’s dig in.

Our lightbulb will need 876 kilowatt hours of electricity for its year of operations. Assuming an average power plant efficiency of 37%, our lightbulb will require 800 pounds of coal (see: How much coal does it take to power a 100-watt lightbulb?).

So, for this hot tub sized pile of coal, what kind of unpleasant byproducts can we expect? Here’s a quick synopsis:

For those of you that like to see the math or understand how more CO2 is created than the original weight of coal, you can follow along below.

Let’s start with sulfur dioxide (SO2), one of the main causes of acid rain. According to the EIA, the electric utility industry burned 851 million tons of coal in 2014. That same year, according to the EPA, the same utilities emitted about 3,195,000 tons of sulfur dioxide into the atmosphere. In other words, for every ton of coal burned, 0.00375 tons of SO2 is created.

By the way, coal-powered electricity is the largest source of SO2 by far, generating 64% of it in 2014.

1.67 pounds of nitrogen oxides are created

What about nitrogen oxides (NOx)? These pollutants create acid rain and smog. The same EPA report says that 1,776,000 tons of NOx were created by coal and the electric utilities. Applying the same math, our lightbulb will generate 1.67 pounds of nitrogen oxides.

122 pounds of coal ash is left over

Coal ash is the solid byproduct left over after coal is burned. It is second only to trash as the largest source of waste material in the US. According to the EPA and the American Coal Ash Association, coal power plants created just under 130 million tons of ash in 2014. This means that every ton of coal we burn leaves 122 pounds of coal ash. Coal ash contains trace amounts of various toxic materials including chromium, arsenic, chlorine, chromium, lead, as well as uranium and thorium.

In the US, most coal ash is captured and is no longer released into the air. Instead, it is often mixed with water and kept in nearby slurry ponds.

0.064 ounces of radioactive uranium and thorium

The geologic processes that create coal concentrate a range of trace materials into these black rocks. A study by the US Geologic Survey of 2,300 coal sites found the majority had concentrations of uranium between 1 and 4 parts per million. Similar results were found for thorium. Averaging this to 2.5 ppm for both elements leaves us with 5 ppm of radioactive materials per ton of coal. 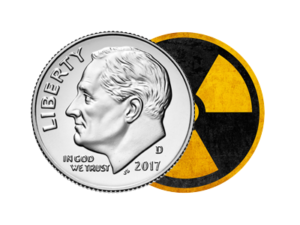 A concentration of 5ppm in a ton of coal means about 0.01 pound, or 0.16 ounces, or 4.5 grams of radioactive materials. Therefore, the 800 pounds of coal required to power our lightbulb will leave behind 0.064 ounces of uranium and thorium, a little less than the weight of a dime.

In some places, the concentrations can be 6-7 times higher – so high that at least one mining company is finding it cheaper to extract uranium from coal ash than uranium mines.

Just how dangerous is this radiation? Most research says not much at all. Remember, there is already a lot of natural background radiation and all the material from coal ash is caught and stored within the plant (at least in the US).  So, even if you live within a mile of a coal plant, you will only increase your exposure to radiation about 5% a year, less than an x-ray.

More interesting is that nuclear plants have far less radiation. A widely cited paper by Alex Gabbard, of Oakridge National Laboratory, found that the radioactivity outside a coal plant is up to 100-times higher than a nuclear plant. This is largely due to the safety regulations governing the nuclear industry (see: What are the risks of radiation from nuclear power plants?)

Coal’s most notorious byproduct is carbon dioxide (CO2). Every million BTUs released from burning coal releases an average of 208 pounds of CO2 (see note below). Since a ton of coal has 20.025 million BTUs, that means it creates 4,172 pounds of CO2 when it is burned. Running our 100-watt bulb for one year will produce 1,670 pounds of CO2.

But wait, how can 800 pounds of coal produce twice its weight in CO2? Another article from the EIA explains this in detail but, in short, it’s because the carbon atoms in coal are each combined with two atoms of oxygen from the air to form the CO2. In other words, the extra weight comes from pulling in material for the air.

At room temperature and pressure, 1670 pounds of CO2 would fill three 18-wheeler trucks.

OK, this one will take some work but it’s important to do because some forms of mercury can be really nasty stuff. Coal plants account for half of all human-released mercury (source: EPA). Mercury is a heavy metal and a potent neurotoxicant. The type of mercury in thermometers carries some health risks but when it is released into the atmosphere, it combines with other elements and can easily create far more toxic variants.

There is a widely told story of a researcher, Karen Wetterhahn, who tragically died after only a drop or two of a particularly lethal compound of mercury fell on her hand. Despite wearing latex gloves, the mercury seeped through to her skin in a matter of seconds and she later died. This story is meant to be illustrative and drive home the health risks of mercury. It is not a scientific study or safety evaluation. But, if you want to look at the math and see how it works for yourself, read on…

Note: There are numerous sources of information on the topic of coal byproducts. The math is shown here to help explain how our numbers were derived but it is inevitable that other approaches will yield different results. If you find a glaring mistake, please let us know in the comments below.

Also note: we use the US government data wherever possible. Many environmental groups do their own studies and find pollution is often worse than reported by the government. Our goal here is to bring as many people as possible into these conversations so we avoid using data that could be dismissed as aggressive.