Nuclear power is the most divisive and debated of all electric generation solutions. Critics say Fukushima and Chernobyl prove it is too dangerous. Supporters say there is no other proven way to generate huge amounts of carbon-free, baseload electricity. So, what is the answer? Should we step up our adoption of nuclear power or shut it down altogether?

It’s like the old industry joke: what do you get when you switch the first letters of “nuclear”? The answer is: “Unclear.”

Fortunately, I believe it’s possible to find a path forward. After a year’s worth of research and six prior articles, I will endeavor to distill this incredibly complex issue into a simple conclusion. To help set the context, let me start by summarizing the four most important considerations that will determine the future of nuclear power.

The environmental impact of nuclear power is defined by two opposing horrors. One side fears a future filled with unchecked radioactive waste and the ever-present possibility of meltdowns, dirty bombs, and mass evacuations. The other side fears runaway climate change because society fails to embrace the only large-scale source of electricity that doesn’t emit greenhouse gases. While there are many ways to mitigate both sides’ concerns, there is no escaping the fact that nuclear power is a “double-edged sword” when it comes to the environment. 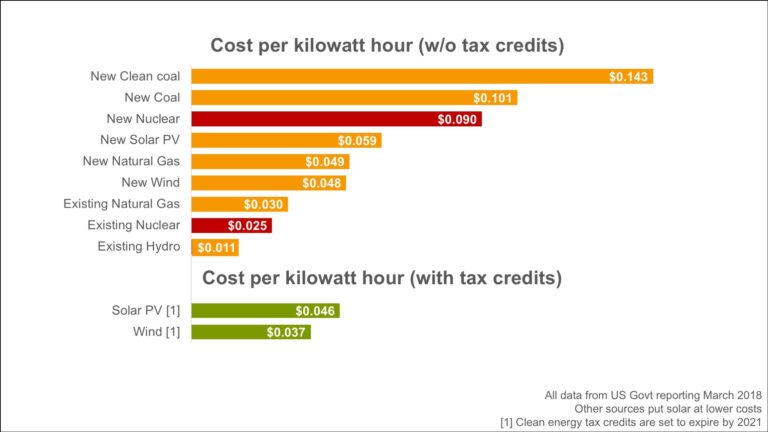 Nuclear is expensive for two reasons: nuclear plants are incredibly large and complex, and they are heavily regulated to ensure safety. Seventy percent of a nuclear power plant’s costs come from its initial construction, and much of that cost comes from licensing and safety regulations. In China, where regulations are not as stringent, the cost to build nuclear power plants is one-half to one-third of the US. These high costs come even after billions of dollars in government support like loan guarantees, suspended waste disposal fees, and liability caps (check out the first article in the series on the costs of nuclear power).

What about emerging, next-generation nuclear technologies? While new kinds of reactors are likely to be safer and better at handling waste, they still require some form of nuclear fuel. Because of the necessary (and expensive) safety requirements for handling highly radioactive materials, most experts have concluded emerging technologies won’t be enough to meaningfully lower the costs of nuclear power (see the recent article on emerging nuclear technologies).

People are often surprised to learn that nuclear plants have fewer deaths and health issues than any other kind of power plant. Even falls from rooftop solar installations are more common than nuclear power plant incidents.

#4 – Nuclear incidents are rare but devastating

There have been three highly publicized nuclear incidents, Chernobyl, Three Mile Island, and Fukushima (these are covered in earlier articles). Nuclear advocates point to this small number as evidence that catastrophes are few and far between. Critics counter that there are only 440 nuclear plants. They say if 3 out of every 440 airliners crashed over their lifetimes, aviation would shut down.

The actual loss of life directly caused by these meltdowns is actually quite small. In fact, no one died directly from Three Mile Island and only one person is said to have died from Fukushima, and that was many years later. The terrifying part of nuclear accidents is their indirect impact. For example, 1,600 died when 130,000 people were forced to relocate from the areas surrounding the Fukushima nuclear plant. As tragic as this is, the number pales next to the 15,000 lives lost as a direct result of the Tsunami that triggered all these disasters.

While the loss of life is front and center, the indirect impacts have a ripple effect. The latest estimate to clean up Fukushima is $180 billion, that’s the same as the GDP of Greece. Even more stunning were the reflections of Mikhail Gorbachev, the last leader to preside over the Soviet Union before it crumbled. When asked what ultimately led to the end of the USSR, he said the largest cause was probably the economic and political fall out from the Chernobyl catastrophe.

Nuclear power plays a different role outside the US

The US is, by far, the largest consumer of nuclear power in the world. But, the balance will almost certainly shift in the coming decades. The US is unlikely to build any more nuclear plants but younger economies, like China and India, are building dozens. These countries lack the US’s vast supplies of cleaner natural gas so they are looking elsewhere to provide the 24/7/365 electricity required to support their growing economies. For the next few years, before batteries offer affordable options, these countries must choose between nuclear and coal to power their growth. The rising concern over greenhouse gases makes nuclear power an attractive alternative.

THE FREEING ENERGY PERSPECTIVE:
THE BOTTOM LINE ON NUCLEAR

Nuclear is a baseload dream that emits almost no greenhouse gases. But for it to restart its growth in the US and Europe, and to validate the huge ongoing investments in research and subsidies, the nuclear industry has to overcome two immense challenges.

The nuclear industry’s first challenge is to repair a near-universal public perception that nuclear energy is unsafe and that more nuclear catastrophes remain possible. The fact that people use terms like “meltdown”, “fall out”, and “radioactive” every day show how deeply the industry’s challenges are baked into the public’s psyche. Is this warranted or even fair?

Across my research into the nuclear industry, I was continually surprised. Some surprises were positive – like radiation being less harmful and nuclear plants being safer than I had assumed. But, more soberly, I was surprised by the nuclear disasters that might have happened but, fortunately, were avoided. Had the Three Mile Island operators continued to misinterpret the warning signs for another hour or so, a full-blown, Fukushima-class meltdown could have occurred. Equally concerning, I learned that uncontained meltdowns can occur if earthquakes or crashing jetliners impact the far less protected cooling pools that store spent waste outside the reactors.

The biggest surprise of all was just how many changes were made to existing plants after each of the three major disasters. Nuclear advocates point to this as evidence of increasing safety. While I agree with that, it also makes me wonder how much we still haven’t learned. The lessons from Fukushima have cost at least $180 billion so far. If there is indeed more to learn, what are the costs of these future lessons?

The big lessons from Chernobyl and Fukushima are that it only takes one incident to create global outrage and derail an industry – and a country. If the US isn’t even able to break its stalemate on the urgent question of nuclear waste disposal, it’s hard to see voters embracing more new nuclear plants. Despite the incredible value that nuclear power represents, nothing I learned made me believe the nuclear industry could successfully shift public perception, at least not for the better.

Second, nuclear plants take too long to pay back their investors

The industry’s second immense challenge is to convince lenders and governments that it can generate enough long-term revenues to pay off the construction debt of new plants. Think about this – any plant built today needs to get paid current market rates for electricity over the next 30-50 years in order to pay back the debt. Is this really feasible? Or even likely?

All it takes is one more nuclear catastrophe and a reactive public will call for nuclear plant shutdowns across the globe. The most recent US nuclear plant, Vogtle, was only financially viable because of an $8 billion federal loan guarantee. If that plant shuts down for any reason during its 40-year lifespan, US taxpayers will be on the hook to pay off that debt.

Now, think about the incredible cost declines in solar, wind, and batteries. Solar and wind are already far cheaper than nuclear power. We are only a handful of years away before batteries are cheap enough to allow solar and wind to provide emissions-free 24/7 electricity. If any of the hundreds of long-term storage research efforts bear fruit, then solar and wind will be able to completely replace nuclear’s role as 24/7/365 emissions-free baseload power.

Put yourself in the shoes of someone considering financing a new nuclear plant. Are you willing to bet that solar, wind, and battery price reductions will somehow come to a screeching halt after decades of steady declines? Because, if those declines continue, it may only be a decade or so before your nuclear power plant becomes uncompetitive. Additionally, are you willing to bet that regulators will force customers to pay above-market prices for several more decades in order for you to get your loans fully repaid?

The dilemma of radiation vs greenhouse gas emissions is a false choice.

For the first time in the history of the grid, another option is emerging. Affordable, reliable power from the sun, wind, and storage will offer baseload (24/7/365) electricity without greenhouse gases and without the risks of radiation. While that solution is still a few years away from being fully cost competitive, building new nuclear power plants means betting it’s 40 years away or longer. To put it bluntly, that’s a bad bet.

Commercial lenders are highly unlikely to fund any new nuclear power plants without substantial government guarantees. In the face of credible, emerging alternatives for carbon-free electricity, voters and legislators will be very reluctant to lock in decades of potentially overpriced nuclear power. The bottom line is that nuclear power has reached its peak in the US and Europe.

Michael Liebreich, the founder of Bloomberg New Energy Finance, summed it up best when he said, “Running existing plants is surprisingly affordable. It’s building new ones that cost so much. We don’t need to shut down the existing plants but certainly don’t need any more, at least not in the US and Europe.”