Global use of coal-fired electricity set for largest decline in history. Early numbers indicate that the world will see a 3% decline in coal-fired power generation in 2019, a sign that global reliance on coal may be dwindling. Developing nations like India and China are seeing historic slumps in output despite an ever-increasing number of Chinese plants. Interestingly, the US – who is currently withdrawing from 2015 Paris Climate Agreement – led developed nations in cutting coal output, giving proof that economic factors can beat out political factors when it comes to energy. (The Guardian)

Solar on track to become top energy resource by 2035. A recent report by the International Energy Association (IEA) predicts that solar capacity is set to outgrow coal and natural gas by 2035 and become the world’s largest source of energy. The IEA expects 8.5TW of new generation capacity to be added before 2040, with 2/3 coming from renewable sources. If clean energy generation doesn’t keep up with the world’s growing electricity demands, however, this new capacity will do little to curb greenhouse gas emissions. (PV Magazine)

Electric cars are lowering the cost of driving. Though electric vehicles haven’t been on the road for very long compared to their internal combustion counterparts, early data has shown that Teslas and other EVs could last 500,000 miles or more without a need for significant maintenance. This obviously carries long-term cost benefits to individual consumers, but the economics of corporate fleets could undergo a massive shift thanks to electric vehicles. Companies generally sell off their vehicles after 100,000 miles in order to avoid maintenance costs; if they are able to get double (or even triple) the mileage out of their cars, that could lead to significant savings and one more big boost to the growth in EVs. (Quartz)

Lazard releases 2019 Annual Cost of Energy report. Lazard’s yearly Levelized Cost of Energy Analysis was released recently, highlighting the steady decline in costs for renewable energy. Cheaper equipment costs have allowed solar to reach grid parity with wholesale power prices in California, China, and parts of Europe. Solar, along with wind, has seen growing affordability for years and now sits as one of the cheapest sources of electricity generation. (Lazard/PV Magazine) 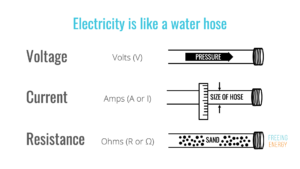 Understanding the basics of electricity by thinking of it as water
The concept of electricity is hard to visualize. Let’s put it into terms that give a better idea of just what goes on inside of electrical circuits and the factors that affect it.
(read more) 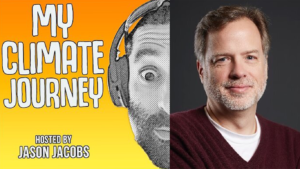 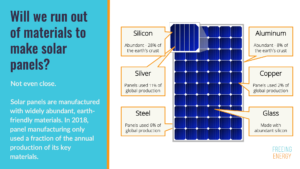 Do we have enough materials to make the solar panels needed for a clean energy future?
Detractors often claim that the materials needed to expand global solar capacity are in short supply. We take a look what those materials are and why we won’t run out any time soon. (read more) 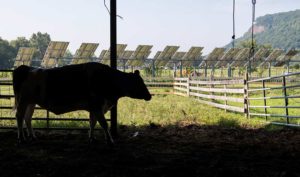 Will the growth of solar power crowd out farmland?
There has been a growing concern that farmland and solar panels can’t coexist. Not only is this incorrect, but the two can even benefit each other in several significant ways. (read more)

November’s podcasts were all recorded in Puerto Rico as Bill Nussey traveled to the island to interview the people behind the microgrid revolution taking place there.

Podcast #024 – After Maria: How microgrids are helping schools in Puerto Rico stay open during outages 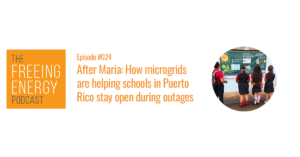 In this first of a special three-part series, Host Bill Nussey travels to Puerto Rico to visit with community leaders, teachers, and a team of energy specialists who banded together to bring resilient power to schools in the island’s remote mountain towns. The teams used an innovative local energy solution, solar microgrids, to lower the school’s electric bills and to make electricity more resilient against future mega-storms as well as the all too frequent shorter outages. 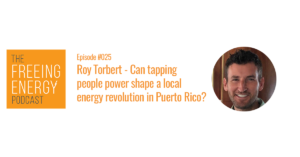 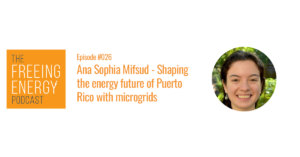 In part three of this special three-part series, Host Bill Nussey travels to the mountains of central Puerto Rico and talks with Rocky Mountain Institute’s (RMI), Ana Sophia Mifsud.  Ana Sophia shares her journey in the world of renewable energy and how by being on-site, she and the RMI team are helping shape the future of Puerto Rico with microgrids, one school at a time. 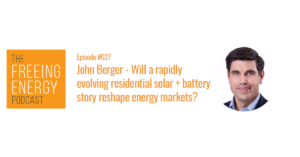 Host Bill Nussey catches up with John Berger, CEO of Sunnova Energy (NOVA), a leader in the residential Solar + Battery service provider market in the United States.  John shares insights about how dramatic changes in distributed local energy are rapidly reshaping energy markets and why the shift is so important. Listen too as John shares how the Sunnova model and focus positions the company to capitalize on that change.